The interactive exhibition "When Women Transform Cities" organized by Cities Alliance and the Institut Français of Tunis was launched on 1 June and will remain open to the public until 14 June.

Engaging women, examining their daily challenges and understanding their urban realities is a premise to transform urban areas into inclusive public spaces for everyone. Yet, in many cities in Tunisia, women and their realities remain unheard and invisible. Cities Alliance is working with local authorities, civil society organisations, citizens, and other urban actors to promote women's empowerment and their involvement in the development, design and planning of cities.

The exhibition Quand les Femmes Transforment les Villes, allows visitors to explore how Cities Alliance's projects promote women's integration as crucial actors in urban development processes. The initiatives and their key results are displayed through videos, photos, and texts, with the testimonies of Tunisian women involved in our initiatives.

We need an urban revolution that allows to rethink cities. Women and girls need to be put at the center of urban development. They need to be empowered to participate in cities in equal parts as men.

The exhibition is a journey through the lives of Tunisian women living in cities across the country. It starts with Tunis and the rehabilitation of inclusive public spaces in the frame of the Inclusive City Programme Femmedina and a cultural circuit, developed as part of the project to show that transforming urban space also requires reprocessing the past and understanding a city's history and culture. 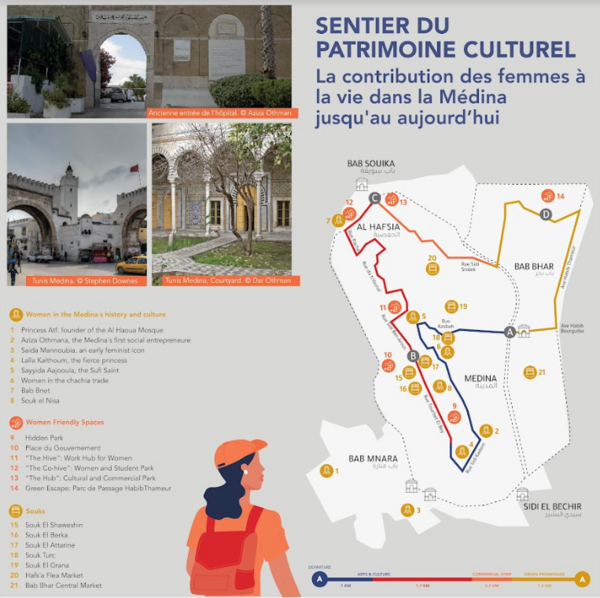 To ensure that women are part of the urban space we need to understand our society's history. Decades of neglecting the needs of women are still permeating our culture. Urban space is still considered a male space.

Other showcased projects include the results of a gender analysis in the cities of Beja and Medenina, carried out in partnership with the Tunisian NGO Aswat Nissa, as part of a project to mainstream gender in local public policies and support the development of gender-sensitive local budgets. The related research highlighted, among others, the need for public action to fight gender-based violence in the cities. Images of a street art performance by young artists in Medenine is also showcased. It aimed at raising political and public awareness for domestic violence.

The exhibition then brings visitors to the cities of Kairouan and Jendouba, where Cities Alliance, through its Cities and Migration programme, fosters entrepreneurship among internal women labour migrants to facilitate their entry to the labour market and promote cities that are socially and economically inclusive to everyone.

"Starting a new business requires perseverance and huge efforts. Nevertheless, I want to support the artists of my region to commercialise their products and contribute to the conservation of our region's artisanal heritage", said Ibithel during the opening event. She is the founder of the e-commerce platform Machmoon.

The journey through Tunisian cities is achieved with an interactive section where visitors are invited to share their experiences of inclusive city life in Tunisia.

For further impressions of the exhibition and the vernissage, watch the video.

The exhibition is possible thanks to funding of the Swedish International Development Cooperation Agency (SIDA).

Tunisia: Unlocking the Potential of Women as Agents of Change