“Extreme heat costs lives. Climate change is wreaking havoc on subsistence farmers and is driving a steady stream of people from rural areas into informal settlements in cities,” she said.

Poverty begets poverty. The answer isn’t to take people out of slums but to take slums out of the people.

Sawyerr provided the keynote opening remarks at a discussion organized by Cities Alliance, CLGF and UKRI. She was followed by other speakers who also reflected on the idea of climate justice in the context of informal settlements.

Sawyerr noted that even if the world pledges to redouble its effort to combat climate change many poorer nations in the global south will still be vulnerable to warmer temperatures, higher sea levels and more frequent natural disasters.

Without more investment in infrastructure, informal settlements located along coastlines could disappear entirely in the coming decades. 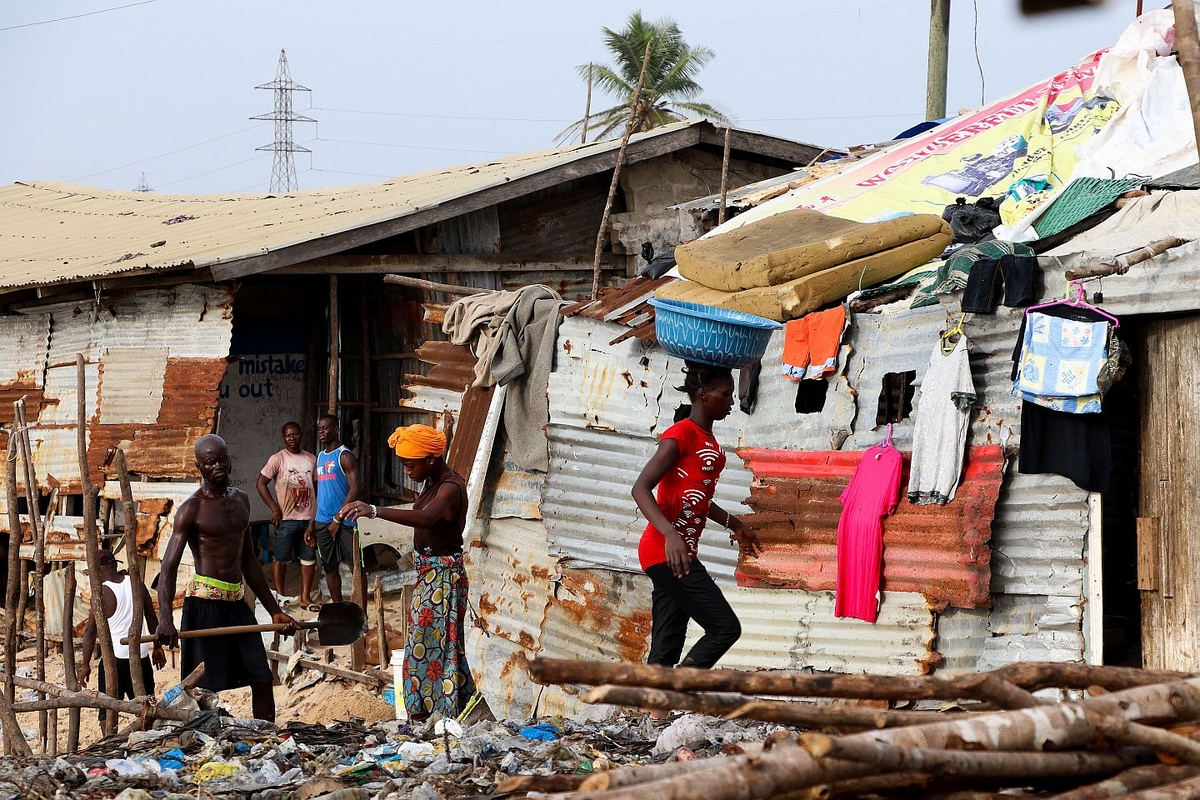 Many of the panellists highlighted some of the realities of informality and inequality in cities and shared ideas about opportunities for working with marginalized communities vulnerable to climate change in order to achieve climate justice.

We know that climate responses need to work with informality, rather than eradicating it.

"We will see a lot of pledges at COP26 today, about a lot of money, nature-based solutions, electric vehicles.. but the vast majority of that finance will have nothing to do with the people that we are speaking about here. Because that focuses on the high-end solutions to the climate problem and it neglects the ways in which innovation is necessary to achieve climate justice", said Bulkeley. 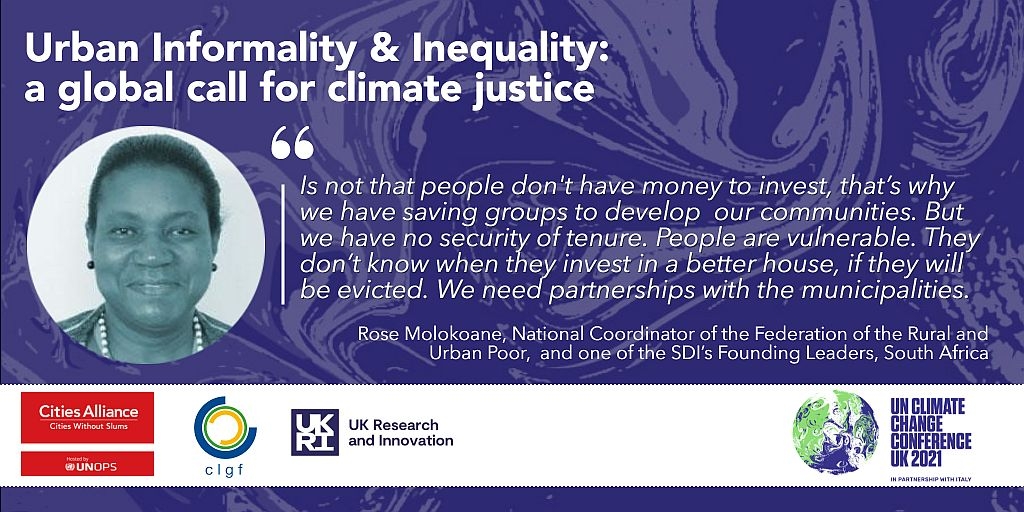 The event was moderated by Greg Munro, Director of Cities Alliance. He was joined on stage, and also online, by about ten panellists from around the world. Beyond the in-person audience in Glasgow, about 300 people followed the discussion live.

Panellists came from diverse professional, geographic, and economic backgrounds yet they shared a common concern. Many advanced arguments for why the global community needs to do more to empower cities and local governments to build their defences against the disastrous effects of climate change, which many are already experiencing. Priorities for local action were identified.

“What we saw in Accra in Ghana is that waste has the biggest impact on the climate. Informal waste collection is a huge part of what allows the waste collection to happen so we need to find ways to innovate that allows informal workers to earn livelihoods and also be parts of the solution for addressing climate change,” said Karruna.

The overlooked role of informal communities as innovators

Waste Specialist Sonia Dias from WIEGO, highlighted that millions of waste pickers often live in informal settlements and through their work, they make a substantial contribution to the reduction of greenhouse gas emissions globally and the protection of the urban environment. She stressed that is paramount to include them in decision making and urban planning processes.

In Accra, Ghana, our emissions calculator tool, shows that GHG emissions have been reduced of more than 5% per year thanks to the work of local waste pickers sorting recyclabes manually, instead of using more intensive technology.

“There are many characteristics that are positive for climate change response,” said David Dodman, Director of Human Settlements for the International Institute for Environment and Development (IIED).

If we look at resource efficiency and the circular economy as being critical for reducing emissions, the informal economy is often miles ahead of the formal economy in terms of moving towards net zero.

Such local resourcefulness can often be overlooked or ignored by policymakers and funders with their own preconceptions about urban solutions. Yet, as speakers noted, ignoring local knowledge is a mistake.

“Residents of informal settlements are active makers of their own urban environment,” said Vanesa Casten Broto, Professor of Climate Urbanism at the University of Sheffield. “In a world shaped by colonial and imperial histories, some forms of knowledge are routinely degraded and dismissed. This gives people a deficit of credibility when they are included in processes of policymaking.

The knowledge of residents of informal settlements may be denied even though it is more relevant than the one from experts who are flown in locations they know nothing about. We must challenge these hierarchies of knowledge.”

Universities have an important role in knowledge co-production regarding urban resilience. This kind of co-production is a potential pathway for urban equality.

Beyond shifts in processes between communities and governments a need to change how we view informal settlements is also needed.

There needs to be a shift in the way we are looking at informal settlements. Informal spaces are simply places where we are not providing services.

Wrapping up the session, speakers noted the importance of dialogue with local informal communities.

“Climate justice should be seen in partnership with communities. Communities have a lot of innovations that should be profiled better,” said Joanes Atela, Convener Africa Research and Impact Network, Director Partnerships African Centre for Technology Studies, Kenya. “Evidence should be based on the needs of communities.”

Launch: Building Climate Resilient and Sustainable Cities for All

How to Ensure No One is Left Behind by Infrastructure Development