Youth participating in LYSD’s MiLéDou basketball programme learn integration, leadership skills and confidence, both on and off the court. LYSD received grant funding through the Cities Alliance Catalytic Fund.

[9 February 2017] -- It is no secret that Africa has a large and growing young population. More than half of all Africas are under 25, and they face considerable social challenges – unemployment, ethnic divisions, and inequalities, among others – with little hope of economic or social mobility.

One non-profit organisation, Leading Youth, Sport and Development (LYSD), has found a novel way to integrate and empower youth in some of Africa’s poorest neighbourhoods: through basketball.

LYSD takes the approach that sports speak to youth in a language they understand. It uses basketball as a tool to bring boys and girls from different social backgrounds together, fostering social inclusion and cohesion.

It operates mainly through its main programme, MiLéDou, which means “we are together” in Mina, a southern Togolese dialect. MiLéDou runs from October to June each year, engaging youth aged six to 20 in various localities throughout Togo and Côte d’Ivoire.

Through MiLéDou, LYSD uses basketball as a way to attract and bring together youth in disadvantaged areas. The sessions are open to all youth, and a desire to learn the game is the only selection criteria.

The programme relies on a network of local educators to implement weekly basketball sessions during the season. Educators are trained to organise basketball practices and, most importantly, mentor each child in the group. They follow children throughout the entire school year, gathering critical information such as who goes to school and who does not, who demonstrates potential for future educational opportunities, who suffers from poverty, and who possesses athletic talent.

The most promising students have a chance at scholarships (funded by LYSD), integration into good schools, internships, and basketball camps. These students, in turn, move on to become role models in their communities and inspire other young people.  The programme pays special attention to gender; one third of participants in MiLéDou are girls.

So far, LYSD has been a great success and continues to gather momentum. Since its launch in March 2013, it has:

--  Organised events for approximately 3,000 participants aged six to 20 from 15 localities in Côte d’Ivoire and Togo.

--  Raised funds to give 47 scholarships. Five of MiLéDou’s brightest young minds have joined prestigious institutions of higher education in South Africa and the United States.

--  Sent 11 of its most determined players to National Basketball Association (NBA) camps in Africa. One player is now in preparatory school in the United States.

--  Laid the foundation for national youth boys’ and girls’ basketball teams in Togo.

In 2015, LYSD received a grant through the Cities Alliance Catalytic Fund to extend the MiLéDou programme to young migrants in Yopougon, one of Abidjan’s most disadvantaged neighbourhoods. The grant, which was given to the International Office of Migrations (IOM) and implemented by LYSD, funded work with three schools and one club in Yopougon, with special consideration paid to the challenges faced by that young migrant girls.

LYSD is the brainchild of Jean-Luc Kossigan Agboyibo, its president and founder. A native of Togo, Jean-Luc comes from a family of 17 children and was raised by his mother and older siblings. His 13 sisters instilled in him the importance of women in society – views that have carried over into and helped shape LYSD’s strong focus on gender equality.

In 1999, Jean-Luc left Togo for France to study at the Sorbonne. During his stay in France, he experienced firsthand how difficult integration can be. After graduation, French laws prevented him from acquiring a work visa, opening his eyes to global inequalities.

He returned to Africa, where he worked at Africa Top Sports and Canal+ Afrique. He became convinced that sports could help make a social impact in villages and small cities and create a more inclusive environment. In 2012, he founded LYSD, and now devotes himself full-time to managing and developing the organisation.

Meet some of LYSD's Inspiring Students

Alphonse participated in MiLéDou in the village of Kpalimé, Togo, from 2013-2014. Despite facing many obstacles, he never gave up. LYSD recommended him to the African Leadership Academy (ALA), a school of excellence in South Africa. After two years at ALA, he was accepted by the University of Rochester in the United States, where he is studying electrical and computer engineering.

Flora is a 17-year-old Ivorian girl from Yopougon who left school in seventh grade because her mother was not able to pay her school fees. She discovered basketball in 2015, and the court became an escape and a way to make friends. She plays on the U18 national team and has found the courage to start taking French lessons. She received a scholarship from LYSD.

Freddy is a gifted young basketball player from in Togo. In 2014, LYSD helped him to spend a week a basketball academy in Senegal and an NBA camp in Burkina Faso. A few months later, Freddy received a scholarship to pursue his dream of playing basketball at Liberty Christian School in the United States.

Mariette from Lomé was orphaned by her mother and not recognised by her father. She was captain of an under-18 Togolese national team that LYSD initiated in 2015 in partnership with the Togolese Basketball Federation. She won a scholarship from LYSD for her last year in high school and is currently studying English at the University of Lomé.

Merveille, from the village of Kouvé, entered high school when she was just 13 years old. A natural leader, she does not hesitate to raise her voice to denounce discrimination, especially from the boys in her village. LYSD offered her a scholarship this year and believes strongly in her capacity to become a spokeswoman in her community.

selection. She became one of LYSD’s young educators, and is using her leadership skills and strong values to spark interest in basketball among young girls. 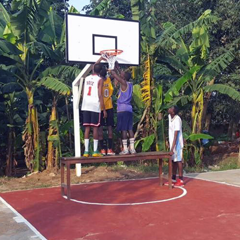 The programme pays special attention to gender; one third of participants in MiLéDou are girls.