Project selected under the Innovation Programme Call for Proposals 2019: 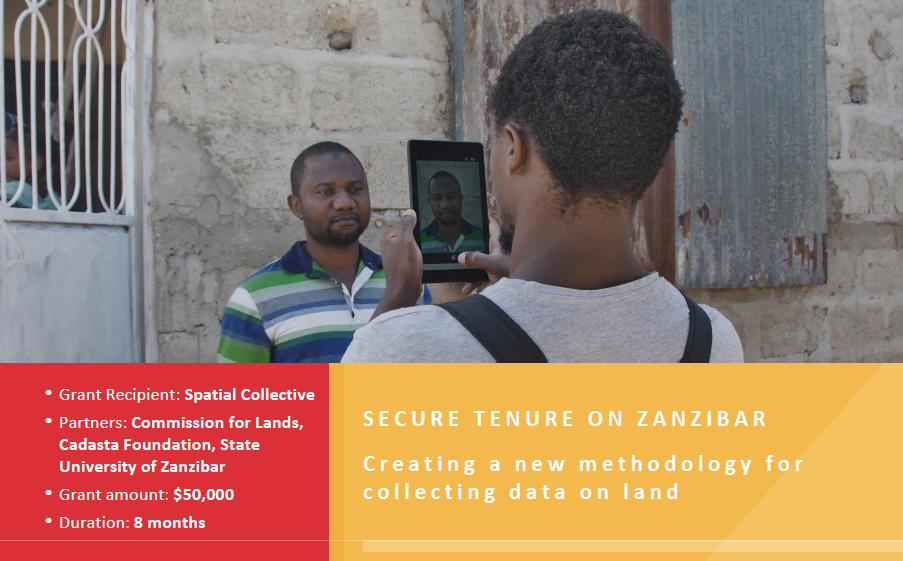 The project collaborated closely with RGoZ, a rarity in this sector. Spatial Collective engaged with and received support from the Ministry of Lands, Energy and Water to conduct this pilot project. They worked directly with COLA in all critical stages, such as the review of existing land adjudication processes, field testing the proposed tool, and the actual property data collection. Through all stages, insights and practical knowledge were shared between the teams.

In 6 weeks of fieldwork, 10 data collectors mapped 492 plots in the town of Shakani and documented 230 men and 85 women as landowners. Of these, only 170 had any existing form of documentation asserting their claim to the land they occupied; the most common (76%) method of land acquisition was by purchase. For the adjudicated plots, certificates of occupancy have yet to be issued, as there are still two legal procedures remaining in the process. However, according to the adjudication officers, these two steps are relatively straightforward, since they now have a means of quickly and efficiently collecting ownership information.

The methodology proved so effective that COLA, supported by a data acceleration grant from Cadasta, have chosen to continue with data collection despite the COVID-19 pandemic (Tanzania remained relatively open during the crisis). The commission expressed interest in further working with Spatial Collective and donors to scale up this project and incorporate other innovative digital strategies that will help them quickly regularize land tenure in the entire island nation.

There are likely hundreds of thousands of properties on Zanzibar Archipelago. Using traditional tools and methods, the work of documenting every single plot cannot be finished in a lifetime. By contrast, using new technologies dramatically speeds up the data collection process, while at the same time, the ease of use enables the deployment of a large contingent of enumerators.

The only caveat, as raised by the adjudication officers, was the accuracy of the location data. The project application could not achieve the accuracy of the GNSS RTK system currently used by the department. To remedy this, we incorporated high-resolution drone imagery (7cm) into our workflow, which helped us achieve less than 1-meter accuracy, which was acceptable to the adjudication officers.

“The positive feedback I get from residents personally calling me is encouraging. This shows that this method we are testing is so far effective in terms of involving the local community. So far, my office is satisfied with the speed and quality of data coming in.”

“This new method the Commission is using to document our land is very effective to us. In a few minutes, I complete a process that used to take months. I don’t to have spend a lot of money and time visiting the lands office multiple times to deliver various documents.”

About the grant recipient

Spatial Collective is a Nairobi-based, Geographic Information Systems (GIS) and technology consulting company that
operates primarily in East Africa. Its model consists of training and supporting communities and organisations on
adopting available technologies to collect data that is important to them.

Most of Spatial Collective’s work is conducted in difficult environments where there is little existing data and on issues of
significant global importance ranging from property rights, environmental management, livelihoods, economic prosperity,
formal and informal governance initiatives, and safety and security.

Resources from this project