Part of the Cities Alliance Joint Work Programme for Equitable Economic Growth, the initiative looks at how cities can improve access to public goods and services as a pathway towards economic transformation.

[10 July 2017] -- The United Nations Capital Development Fund (UNCDF) has received a grant to facilitate a Cities Alliance campaign for equitable economic growth in two secondary cities in Uganda. Part of the Cities Alliance Joint Work Programme for Equitable Economic Growth, the initiative looks at how cities can improve access to public goods and services as a pathway towards economic transformation.

UNCDF will work with stakeholders in the two cities of Mbale and Gulu, which both held workshops to kick-off the campaign in December 2016. The workshops were the first in a series of gatherings where local public, private and civil society actors will work together to explore ways to expand service access among individuals, households and formal and informal businesses.

“UNCDF views the Cities Alliance Joint Work Programme in Uganda as a powerful vehicle to address the challenge of unequitable, imbalanced and fragmented urban economic growth. UNCDF will work with the participating municipalities and other Cities Alliance members to identify solutions that work and will help translate such solutions into specific programmatic interventions to foster equitable and inclusive urban development,” said Pozhidaev.

In parallel to the workshops, UNCDF will produce in-depth diagnostics focused on the identified service areas. This analysis of city-specific assets, opportunities and limitations will result in policy recommendations that outline practical steps that can be taken at the city level to foster vibrant, equitable, local economies.

The campaign will run for two years and forms an integral part of the JWP’s globally-oriented components. The insights from Uganda will not only benefit the cities themselves, but also inform the global dialogue on how to foster equitable economic growth in resource-strained secondary cities around the globe.

UNCDF joined Cities Alliance and the Joint Work Programme in 2015. It is the UN’s capital investment agency for the world’s 48 least developed countries, offering finance models that unlock public and private resources, especially at the domestic level, to reduce poverty and support local economic development.

About the Joint Work Programme for Equitable Economic Growth

The Joint Work Programme for Equitable Economic Growth brings together members and partners to produce global knowledge, facilitate policy dialogues and support city-level diagnostics and policy recommendations. Recognising the needs and capacities of cities and local governments, it focuses specifically on supporting equitable access to public goods and services by all citizens and formal and informal businesses.

The campaign city initiative was first launched in Gulu and Mbale in December 2016. Narayanganj and Sylhet in Bangladesh, as well as the Ghanaian cities Cape Coast and Agona Swedru, joined the campaign in 2017.

The Joint Work Programme is chaired by the UK Department for international Development (DFID). 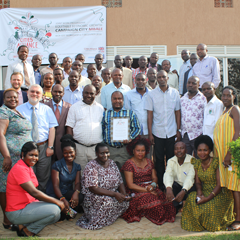 The insights from Uganda will  inform the dialogue on how to foster equitable economic growth in resource-strained secondary cities around the globe.