For Countries Implementing the New Urban Agenda, A New Study on Latin America’s National Urban Laws Is a Valuable Resource

By Anaclaudia Rossbach, Cities Alliance Regional Adviser for Latin America and the Caribbean

[25 April 2018] -- The idea of this publication emerged from a series of side events in preparation for the Third United Nations Conference on Housing and Sustainable Urban Development (Habitat III) in 2016. It gathered momentum in Quito, along with the increasing awareness of the critical role national frameworks play in enabling local action towards more sustainable, equitable, democratic and inclusive cities: the backbone of national urban policies, which are a priority for the New Urban Agenda.

Ideally, national urban policies should be perceived as a process that can lead towards a broader framework that includes investment programmes, citizenship participation channels, a legal structure as a foundation for policy integration at city level, and a stronger urban sector overall.

To help support this process at the global scale, Cities Alliance recently published an important new study titled An overview of national urban laws in Latin America and the Caribbean: case studies from Brazil, Colombia and Ecuador. It is the first time that information on urban legal frameworks in LAC has been collected, mapped, and analysed.

For the Cities Alliance, urban know-how and innovation from the Latin America and the Caribbean region (LAC) region is crucial to informing its global and regional programmes, and to addressing its core mission of promoting equitable cities. And with the extensive mapping of urban laws in LAC and careful analysis in this new publication, it will be a valuable resource for countries who are considering improving their national legal framework, which is a necessary part of consolidating a national urban agenda.

The study was developed in three major parts: Mapping, examples, and comparative analysis, which includes strategic recommendations and new trends emerging in the region. It provides the urban community with concrete examples and mechanisms that can help pave the way for implementing the New Urban Agenda.

An overview of national urban laws complements the Habitat III process, whose major achievement was a consensus on principles and roles for a first global commitment in the urban sector. The study adds value to previous processes and agreements at the global and regional levels, helping advance the discussion with very structured knowledge and analysis.

The publication looks at the main elements that need to be considered when constructing a national legal framework from the standpoint of urban reform. It takes a pragmatic approach and delves into the subject, exemplifying how Brazil, Colombia and Ecuador have managed the process of developing national urban laws, including drafting the law, how it was conceived, and the implementation process.

These three countries were chosen based on a common denominator: Recognition of the social function of the land and the city, one of the key principles stated in the New Urban Agenda. In my view, this is the most critical and urgent issue that must be addressed in order to promote equitable cities and, especially in LAC, to overcome the historical territorial segregation among rich and poor.

Brazil and Colombia approved key legislation 15 and 20 years ago, respectively, and have made considerable progress towards consolidating the legislation at the national and local levels as well as among the executive and judiciary branches. Both countries have significant experiences to share. Above all, they went through a similar pattern of cultural change in recognising informality, understanding that cities must incorporate their poor segments and address strategically vulnerable territories within a holistic and multi-dimensional approach that looks at physical, social, economic, and environmental aspects.

Ecuador, on the other hand, provides an example of a country early in the process. It passed a national urban legislation in 2016, and cities are still implementing the law. At the same time, approving such a progressive law that clearly recognises the right to the city in line with its constitution is a significant paradigm shift for Ecuador. Of course, there are challenges ahead, as a deeper cultural and institutional changes need time and require massive action from cities, national governments, the judiciary, social organisations, and critical thinking from academia and researchers

The publication was coordinated by Cities Alliance and noted Brazilian urban planner Daniel Montandon, who mapped current laws in the region, analysed trends, compiled the case studies, and crafted critical recommendations in the perspective of the New Urban Agenda and the right to the city. It is a collaborative effort supported by key stakeholders in the Latin American region, including the national governments of Colombia and Brazil and the Interamerican Development Bank.

Its launch comes at a very strategic time, taking advantage of the significant mobilisation that accompanied the Habitat III process in LAC. National and local governments, civil society, academia and international agencies are joining forces to support the regional “Plan of Action” led by the Economic Commission for Latin America and the Caribbean (CEPAL), UN-Habitat, and MINURVI (Forum of Urban and Housing Ministries), which aims to support and monitor the implementation of the New Urban Agenda framed by the Sustainable Development Goals.

Cities Alliance is delighted with the interest An overview of national urban laws in Latin America and the Caribbean has already garnered, and we are confident that the publication will become a valuable tool for regional stakeholders as they work towards achieving agreed goals and targets, fostering national urban policies frameworks, and advancing with the New Urban Agenda.

The authors of An overview of national urban laws in Latin America and the Caribbean are prominent experts and practitioners in their respective countries. They generously shared their experiences with the design and implementation of the laws in high-level articles that are clear, concise, substantive, and easy to follow. 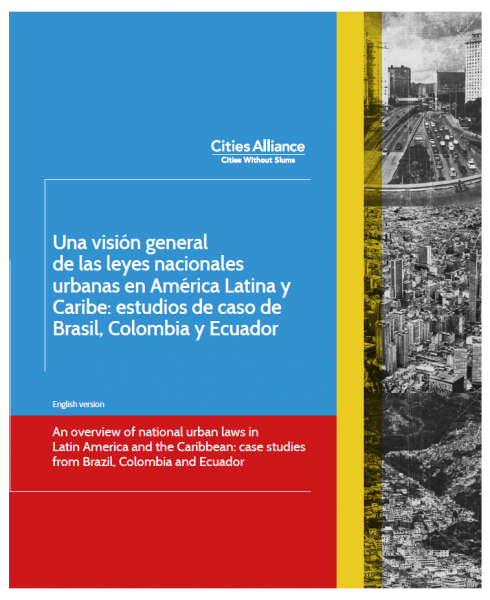 The study marks the first time that information on urban legal frameworks in LAC has been collected, mapped, and analysed.

Download An overview of national urban laws in Latin America and the Caribbean: case studies from Brazil, Colombia and Ecuador