Cities Alliance will also co-host several side events at COP21 aimed at contributing to the dialogue on climate action in cities, including two high-level events organised by our Joint Work Programme for Habitat III.

[30 November  2015] –  In addition to Africities, the 21st United Nations Framework Convention on Climate Change Conference of Parties (COP21) is also a major event for the Cities Alliance partnership.

For the first time in over 20 years of United Nations negotiations, COP21 will aim to achieve a legally binding and universal agreement on climate. The event is being held in Paris, France 7-8 December 2015.

The Cities Alliance Joint Work Programme will also partner with the Medellin Collaboration on Urban Resilience (MCUR), a global partnership formed at the World Urban Forum in 2014 to build urban resilience. The MCUR partners collectively work in over 2,000 cities globally and commit more than $2 billion annually toward advancing resilient urban development.

--  “Financing Low Carbon and Climate Resilient Urban Projects” on 9 December 16:00-17:30 at Cities and Regions Pavilion. This event will showcase the roles, opportunities and constraints faced by Cities Alliance members and cities in developing and financing urban climate investments.

Both events will contribute to the dialogue on climate action in cities, highlight the importance of cities in tackling and preparing for climate change, and offer direction to this discussion following COP21. 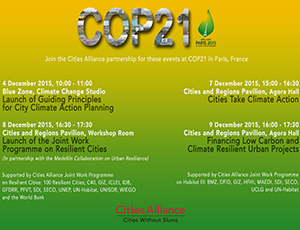 We will be sending out a Special Edition of our newsletter with coverage of both COP21 and Africities. Stay tuned!