This project was selected under the Innovation Programme Call for Proposals 2020 - Stronger Partnerships: Local Innovations for New Climate Realities in Cities - in collaboration with the Global Programme on Climate Change, Resilience and Informality

Young people and digital technology often go hand in hand. Badabon Sangho, a women-led NPO working on development issues in the Southwest region of Bangladesh, seeks to leverage this natural affinity to aid in an ambitious project to improve climate resilience planning in vulnerable urban areas.

Through a grant provided by Cities Alliance Innovation Programme,  Badabon Sangho will work with vulnerable communities to better understand climate risks. The approach includes engaging with authorities on data, information, and mapping for informal settlements, including working on municipality development plans and projects with the assistance of databases and digital mapping. 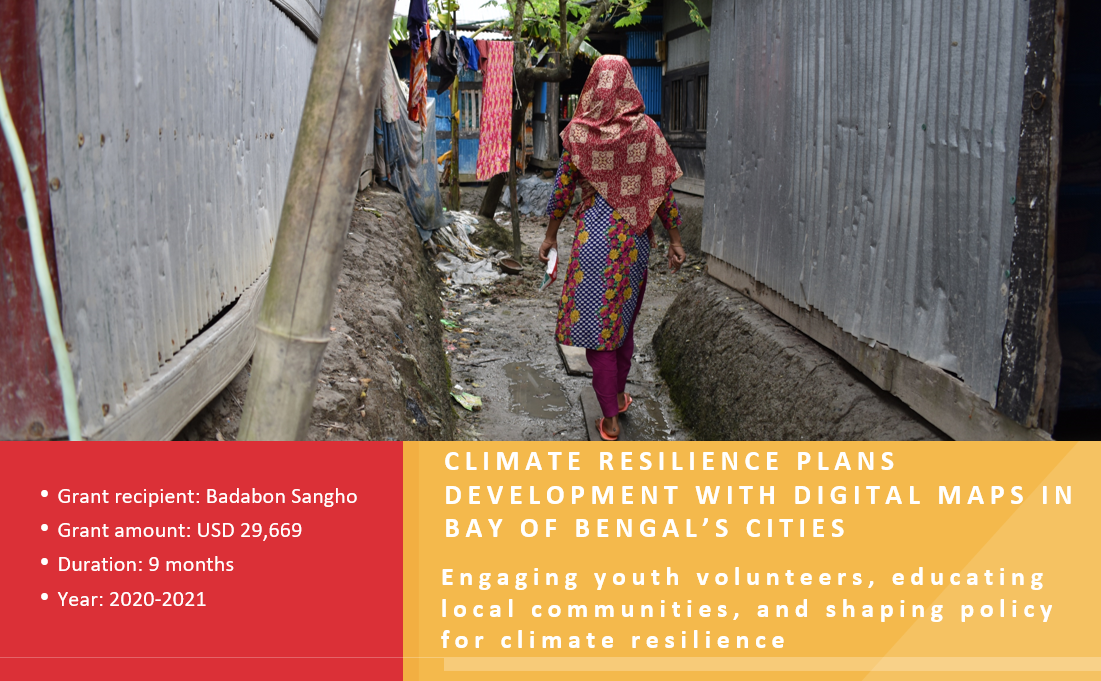 What is the problem?
Densely populated coastal cities and informal settlements in Bangladesh are highly vulnerable to frequent cyclones, erosion, sea-level rise, and other climate-induced impacts. Overflows of seawater have submerged households, and saline intrusions into freshwater and soils have resulted in scarcities of drinking water and damage to the livelihoods of indigenous (Rakhine) and women-headed families.

Where is it?
Kuakata and Mongla port municipalities in the Bay of Bengal belt in Patuakhali and Bagerhat districts, Bangladesh

Who does it affect?
Urban poor indigenous (Rakhine) communities and women-headed families living in informal settlements in Bangladesh

What are the causes?
Residents of vulnerable communities lack understanding on climate risks. They have not engaged with authorities on data, information, and mapping for informal settlements nor participated in municipality development plans and projects. Municipal authorities lack climate resilience plans as well as tools and methods to engage these vulnerable communities in designing and developing integrated climate resilience plans with the assistance of databases and digital mapping.

Through this project, Badabon Sangho seeks to orient residents and elected bodies on the importance of climate resilience plans and on the advantages of using digital mapping and databases in their creation.

The project will begin with an organised series of formal and informal community meetings, learning sessions, and consultations. Next, youth volunteers will be trained in data collection and digital mapping using apps on Android mobile devices with Open Data Kit (ODK) to collect and upload data in the field.

The resulting geospatial maps and databases will be used by local residents, elected bodies, and others who will form committees to develop climate-integrated resilience plans for these informal settlements. The databases may also be used to help resolve land tenure issues for indigenous and women-headed families.

Educational billboards will be designed and installed in both municipalities, and an impact story involving the project beneficiaries will be produced. The project is also expected to influence policymakers in the process of annual budgeting and the implementation of resilience measures for such vulnerable communities.