Moving On with AAPS to Revitalise Planning in African Cities

Recently, the Association of African Planning Schools (AAPS) published an e-book reflecting on its first ten years. It is a fascinating visual journey, full of stories, case studies and anecdotes about how planning in African cities is slowly being revitalised.

[13 June 2016] -- Recently, the Association of African Planning Schools (AAPS) published an e-book reflecting on the first ten years of its existence. Titled Moving On, the book is a fascinating visual journey, full of stories, case studies and anecdotes about how planning in African cities is slowly being revitalised.

The book also highlights how unique the AAPS is, and how much it has accomplished already. Africa’s first peer-to-peer network of planning schools, AAPS was founded to improve the quality and visibility of planning pedagogy, research and practice in Africa. It also promotes planning education that advocates ethical, sustainable, multi-cultural, gender-sensitive, and participatory planning practices. It currently has a membership of 54 planning institutions.

With support from the Rockefeller Foundation and the Cities Alliance, among others, AAPS has helped drive a much-needed shift in perspective on city planning in Africa. Africa’s cities are among the fastest growing on earth, growth that is driving change on a social, economic and spatial level.

However, while Africa’s cities have been changing, the approach to urban planning has not. Many planning schools still rely heavily on traditional, Colonial-era approaches that do not take informality or community participation into consideration – of little use in a region where most urban growth is taking place in slums. The result is cities that cannot accommodate their citizens or benefit from growth.

Learning from each other

AAPS is changing that. It has brought planning institutions together from across Africa so that they can engage and learn from each other, instead of relying exclusively on Northern models as in the past. African planners are discussing key issues including land access, climate change and, increasingly, urban security and resilience.

More and more, planning research and practice is focusing on periurban areas and secondary cities, which are among the fastest growing in the region. Planning education is also incorporating the benefits of technological advances, including computerised planning applications such as GIS and remote sensing.

This learning is facilitated by the AAPS website and its active social media sites, which enable networking and communication among members.

A new planning urban curriculum based on Africa's reality

In addition to fostering knowledge exchange, AAPS has also worked to revamp Africa’s outdated planning curricula. Members worked together to devise a postgraduate curriculum that responds to qualities of urban spaces in Africa not previously considered in conventional planning curricula, such as informality, the relationship between infrastructure and spatial planning, access to land, actor collaboration and climate change.

Together with partners, AAPS also developed teaching toolkits and other online resources for planning educators. The postgraduate curriculum that has evolved is now being piloted at the University of Zambia in Lusaka.

Much of the collaboration to shape the new planning curricula took place at AAPS’ annual all-school meetings, which were crucial to coming up with new ideas, fostering debate, and developing new partnerships.

Making the most of strong partnerships

To act on its agenda, AAPS established strong partnerships with organisations that shared its vision of inclusive, participatory planning. Collaborations with networks such as Women in Informal Employment: Globalizing and Organizing (WIEGO) and Shack/Slum Dwellers International (SDI) reflect an important shift from a technocratic approach to urban planning to one that engages more directly with citizens.

The partnership with SDI, which was facilitated by Cities Alliance, enabled AAPS member schools to engage with real planning problems in the field. One of its main vehicles was the urban studio, in which members of slum dweller federations worked closely with planning students, taking them out into the field to help them better understand the realities of planning in informal settlements and the key role of communities.

The students also worked with federation members on community enumeration and data collection, analysing the data and creating reports that the communities could use to engage local governments. The studios proved to be a very powerful way to change attitudes on upgrading, and they have been incorporated into AAPS’ planning curriculum.

In addition, a partnership with UN-Habitat’s Global Land Tool Network (GLTN) provided an opportunity to explore innovative methodologies and tools that are more responsive and effective in addressing contemporary urban problems.

Cities Alliance and the AAPS

Cities Alliance joined the Rockefeller Foundation in providing funding for AAPS in 2011. In addition to supporting pilot urban studios in Malawi and Uganda, Cities Alliance supported several of the AAPS’ all-schools workshops, which allowed the network to develop and refine a draft undergraduate planning curriculum.

And when AAPS partnered with the African Centre for Cities (ACC) in Cape Town to build a platform for strengthening urban law reform, Cities Alliance again provided support. In July 2012, Cities Alliance participated in a three-day ACC workshop at the Rockefeller Foundation’s Bellagio Centre in Italy titled “Building a Platform for Urban Planning Law Reform in Sub-Saharan Africa,” which led to a commitment by all parties to pursue a long-term vision for urban law reform.  The Alliance, along with other partners, also funded the Urban Legal Guide for Sub-Saharan Africa, developed by the ACC.

“This really was one of our most strategic and effective investments in the recent period,” Cities Alliance Director William Cobbett said of its support for AAPS in Moving On.

“The particular novelty of the AAPS programme was to identify one of the essential challenges facing cities: where is the next generation of urban practitioners and managers going to come from? And – equally importantly – what will they be taught?”

Cobbett added, “By focusing on the need to update the core curricula of African planning schools, and the need for flexibility and the new approaches to planning that rapid urbanisation demands, AAPS has dramatically increased both the relevance and the impact of its intervention.” 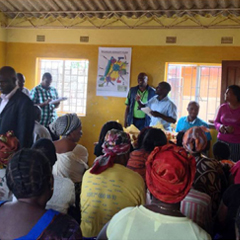 An urban studio in Lusaka, Zambia. Organised through AAPS' partnership with SDI, the studios have brought planning students out of the classroom and into informal communities. Photo: AAPS

“[Cities Alliance support for AAPS] really was one of our most strategic and effective investments in the recent period.” --Cities Alliance Director William Cobbett

Moving On: The Journey of the Association of African Planning Schools

A New Approach to Reforming Urban Planning Education in Africa

An Urgent Need for Urban Law Reform in Africa