Our Future is in Cities: Add Your Voice and Help Shape a New Urban Agenda

UNDP helping facilitate a global dialogue on the draft New Urban Agenda so that everyone can help shape the final vision. Check it out and add your voice through the Habitat III website or the new UNDP4Urban platform.

[2 August  2016] -- For those engaged in urban development and governance, all eyes are on the highest political meeting of the preparatory process to Habitat III, taking place in Surabaya from 25 to 28 July 2016.

I first visited Mongolia in 2005. Like most people, I pictured it as a country of nomadic horse riders herding livestock across the vast steppes.

I was surprised to learn that almost three-quarters of Mongolians now live in cities and towns - with more than half the population in the capital Ulaanbaatar alone. In 1960, only 35 percent of Mongolians were urban, but that proportion has doubled in the last half-century.

A similar transformation is happening in developing countries all around the world. Millions of rural dwellers are migrating to cities and towns, drawn by the prospect of better lives - or driven by poverty, conflict and natural disasters.

Cities and towns are growing fast, swallowing surrounding countryside and transforming nearby villages into suburbs. This process is called urbanization, and it is one of the biggest stories in development today.

As a development worker I used to focus on remote, rural areas and the poor communities living there. My first trip to Mongolia was to work on a UNDP project in the remote Gobi Desert. But most of the people we serve now live in urban areas, and the challenges (and opportunities!) of sustainable development are also increasingly urban.

We’ve recognized this, within UNDP, and we’re refocusing our approach in all our areas of work accordingly. We’re trying to understand how to better address poverty and inclusion in urban areas, how to make municipal governments more effective and responsive, and how to strengthen the resilience and environmental sustainability of cities. And we’re working with a wide array of partners and stakeholders across the world who are focused on the same things.

The broader development community is doing the same.  Making cities inclusive, safe, resilient and sustainable is now part of the 2030 Agenda, as Sustainable Development Goal 11.

We are helping facilitate a global dialogue on the draft, so that everyone can help shape the final vision. You can check it out and add your voice through the Habitat III website or our new UNDP4Urban platform.

How cities grow, and how people live within them, will shape the future of our planet in the coming decades. As a city dweller, I have a stake in getting this right and I’m excited to be working on this challenge together with my colleagues around the world.

This blog was first posted on undp.com on 25 July 2016: http://www.undp.org/content/undp/en/home/blog/2016/7/25/Our-future-is-in-cities-Add-your-voice-and-help-shape-a-new-urban-agenda-.html# 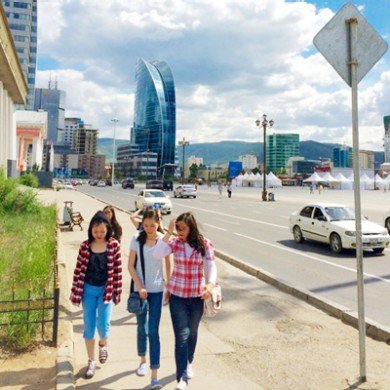 Most young people in Mongolia will grow up in cities such as Ulaanbaatar. Photo: Joseph D'Cruz

Joseph D’Cruz is the Asia-Pacific regional team leader for Inclusive Growth and Sustainable Development. He leads the Urbanization Global Task Team at UNDP. Follow him on Twitter @jd_dcruz.

To learn more about UNDP’s work on urbanisation, and how you can get involved, check out undp4urban.org.