Cities Alliance is pleased to announce the release of Reforming Urban Laws in Africa: A Practical Guide, which proposes an approach to urban law-making based on an understanding of local context.

[11 July 2017] -- Cities Alliance is pleased to announce the release of Reforming Urban Laws in Africa: A Practical Guide.

The laws and regulations that apply in African cities are widely criticised for being inappropriate and out of date. Too often, law imposes impossible compliance burdens on both city governments and citizens, which leads to widespread disregard for those laws.  Nobody can afford to comply with the laws, and the costs of implementing them is beyond the reach of city governments.

Where laws set out the respective powers and functions of city and national governments, they are often vague and ambiguous, which makes it difficult for citizens to know which level of government is responsible for different types of decision making.  The rights and interests of households and firms become useless if there is no way of using the law to protect them.

As African cities prepare to tackle the massive challenges of the 21st century, the need to have effective and appropriate laws in place is a key priority.  Without clear and straightforward laws –  laws that are easy for citizens to understand and for officials to implement – it is virtually impossible to build the governance systems that the cities need to meet their many challenges.

Not only do the laws need to be clear and easily understood, but they also need to be designed and written in a way that addresses real and practical problems, protects cities’ key strategic policy objectives, and accommodates the distinct challenges that each city faces in its particular economic, environmental and political context.

National and city governments as well as key international development partners all agree that new laws are needed, and that urban legal reform is a priority.  The track record of urban legal reform has, however, proved to be very poor.

Thus, the Guide focuses on the law-making implementation challenge: How do we implement our intention to make better laws for our towns and cities?  Typically, a legal expert – often an international expert with little exposure to local context – is appointed, given a brief, and told to come back with a legal technical solution in the form of a new law.  This solution is seldom helpful in practice.

The Guide proposes an approach to urban law-making that is solidly grounded in an understanding of the local context: How the cities work, how the legal system works, and how the government works at different levels.

The authors – Stephen Berrisford of the African Centre for Cities at the University of Cape Town and the late Patrick McAuslan, formerly of Birkbeck College, University of London – combine their decades of practical experience of urban law-making in African countries to provide a practical Guide to officials and other practitioners.

Many non-lawyers find the law-making process intimidating and confusing.  In this Guide, the authors break down these barriers and explain clearly how good urban laws need the informed participation of all stakeholders.  They also introduce techniques and approaches to promote a law-making process that takes as its starting point what is practically doable.

We all aspire to cities that are more efficient, more inclusive and more productive.  For this we need laws that work well and work for everyone.  This Guide provides invaluable support to our partners in African countries tackling the urgent task of urban legal reform. 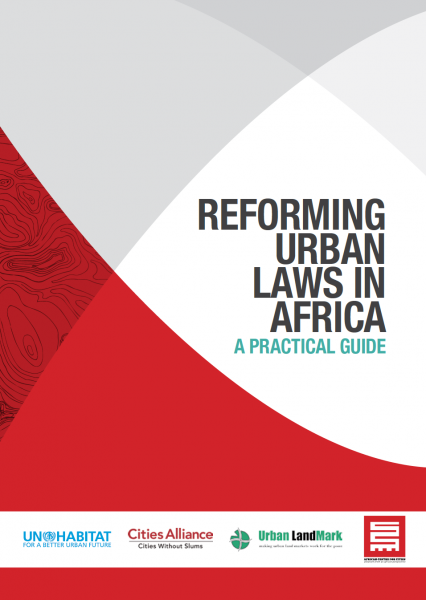 We all aspire to cities that are more efficient, more inclusive and more productive.  For this, we need laws that work well and work for everyone.

The African Centre for Cities