Cities Alliance has adopted a new Charter to guide its operations, the major outcome of the Alliance's 2010 annual meetings. The new charter defines Cities Alliance primarily as a global partnership for urban poverty reduction and the promotion of the role of cities in sustainable development.

[7 December 2010] -- The Cities Alliance partnership recently adopted a new Charter or constitution to guide its operations for the foreseeable future.

This was the major outcome of the tenth meeting of the Alliance’s Consultative Group which was held recently in Mexico City, simultaneous with the Third World Summit of Regional and Local Leaders organised by United Cities and Local Governments.

The move towards the new Charter can be traced to the Consultative Group meetings held in Manila in 2007, when the Alliance’s Medium Term Strategy 2008 – 2010 was first presented, through its adoption at the Barcelona CG meetings, its implementation and the analyses of the early results generated.

The process was further driven by a number of other factors including trends in urbanisation and the urban debate, the development aid debates fuelled by the Paris Aid declaration and its Accra refinements, and the Alliance’s deliberative evaluation of its strategic goal and objectives occasioned by its 10th anniversary meetings in Mumbai. 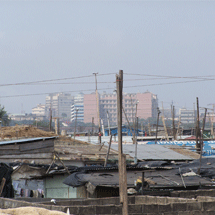 The new Charter defines Cities Alliance primarily as a global partnership for urban poverty reduction and the promotion of the role of cities in sustainable development. Photo: Accra, Ghana. William Cobbett/Cities Alliance

The new Charter defines Cities Alliance primarily as a global partnership for urban poverty reduction and the promotion of the role of cities in sustainable development. It is a partnership formed between local and national governments, slum dwellers, the private sector, NGOs and development partners, one which promotes the vision of Sustainable Cities without Slums.

--  Improving their cities, and local governance, for all residents;

--  Adopting a long-term, comprehensive and inclusive approach to urban development;

--  Implementing those reforms necessary to effect systemic change, and to achieve delivery at scale; and

City and nationwide slum upgrading and city development strategies remain the key pillars of intervention, as in the old Charter but these are now complemented by a third pillar - National policies on urban development and local government. Cities Alliance members and partners are able to respond to a range of urban developmental challenges within these three broad categories, per their identification as priorities by the city or national government, slum dwellers, the private sector and other partners.

Cities Alliance support to help achieve the vision of a sustainable city without slums will be provided through four main business lines:

--  Communication support, and advocacy - Activities designed to improve awareness of relevant policies or activities, influencing changes to policies and behaviour and contribute to dynamic local, national, regional and global debates.

There are two categories of membership: (i) Full members and (ii) Associate members. Full members include government representatives, multi-lateral organisations, local government representatives (through UCLG and Metropolis), and international networks of partners organisations. Associate members include foundations, NGOs, private companies, and local authorities and other partners invited to participate in the CG sessions without direct participation in the decision making process voting rights.

The Cities Alliance is now structured into:

--  The Consultative Group (CG) - comprising all members of the Cities Alliance, and is the supreme primary decision-making body of the organisation;

--  The Executive Committee (EXCO) – comprising a combination of permanent members, rotating members and non decision-making, ex-officio members. The EXCO is appointed by the CG and is accountable to it in all matters including approving the annual work plan and budget of the Cities Alliance, including that of the Secretariat; participating in the selection of the Manager of the Secretariat; identifying and selecting countries for country programme interventions; and nominating the Chairperson of the Policy Advisory Forum.

--  The Policy Advisory Forum (PAF) –is the platform for public discussion, debate and knowledge sharing. The Forum promotes dialogue between CG members and invited partners on key policy and strategic issues of city and urban development, and advises the Cities Alliance on appropriate policies and strategies. At its meeting, the CG unanimously elected Clare Short, previously Secretary for International Development (DFID/UK) as the Chairperson of the PAF for 2010-2013. The PAF has a Chairperson for a period of three years.

--  The Secretariat - carries out the Cities Alliance mandate, and manages its day-to-day operations. A primary function of the Secretariat is to actively facilitate the work of the partnership. The Secretariat operates under the overall direction of the Manager, and is administered by and within the World Bank on behalf of the members.

Members of the Cities Alliance partnership as at 30 June 2010