Lea Spörcke, Carlo Schmid Intern at Cities Alliance, shares her experience attending an Expert Group Meeting on incorporating gender perspectives into the New Urban Agenda 5 June 2016. Her views are hers alone and do not reflect those of the Cities Alliance.

[13 June 2016] -- It is 8 o’clock on a Sunday morning in New York. I am waiting for my coffee, and I am not alone. I am in line with 34 gender experts, young researchers, civil society activists, grassroots women and UN officials who have gathered at UN Women headquarters in support of an issue we all believe passionately in: gender equality in development.

Today, we have all come together at an Expert Group Meeting organised by Cities Alliance, UN Women, UN-Habitat, and the Huairou Commission to discuss gender perspectives on the New Urban Agenda.

A little background information to highlight why this meeting is so important: In October 2016 the Third United Nations Conference on Housing and Sustainable Urban Development (Habitat III) will take place in Quito, Ecuador. The summit will guide and shape the New Urban Agenda for the next 20 years and reinvigorate global commitment to sustainable development.

Over the past year, many regional and thematic meetings, policy units and both official and semi-official events have been convened to discuss the main points and topics of the New Urban Agenda. UN member states, organisations, civil society constituencies and cities have all engaged in the negotiations with a single shared goal: to create a leading document for the mutually reinforcing relationship between urbanization and development. This May, the Habitat III Bureau released the Zero Draft of the New Urban Agenda, the initial product of those discussions.

In reviewing the Zero Draft, Cities Alliance, the Huairou Commission, UN-Habitat and UN Women felt that while some important provisions on gender were included in the draft, it did not go far enough in incorporating the perspective of women.

And that is why we have all gathered on this Sunday morning in New York, to discuss how the New Urban Agenda can be designed and implemented in a gender-responsive way, and how we can advocate for those changes as a group.

"Women and other vulnerable groups"

One of the first things I am struck by as we begin our discussions is how the Zero Draft – a major policy document in 2016 – has combined “women and other vulnerable groups.” When I look around the room, I see community leaders as well as female researchers, UN officials and UN Deputy Executive Directors. And not a single one is happy to be seen as an add-on to vulnerable groups.

Thus, easily we agree on our first statement: There are vulnerable women and women might face specific vulnerabilities. But we want to be acknowledged as agents of change and ensure that all women are empowered to contribute to (urban) transition, change and leadership.

Common positions are not difficult to achieve in this group, which is diverse and committed to gender equality and empowerment of women.  But it is much more difficult to translate our ideas and demands into appropriate language that can be incorporated into the document. We establish three working groups to discuss sections of the Zero Draft: the Preamble and Quito Declaration, Transformative Commitments, and Effective Implementation.

Luckily, we have excellent, well prepared moderators and many experienced participants who know exactly what to do. With their guidance, we agree on concrete language that ensures that the contribution of grassroots women is included, access to reproductive health is mentioned, and a gender perspective is applied throughout the document.

By the end of the day, we had achieved two main outcomes. First, concrete language recommendations were submitted to the Habitat III Secretariat. Second, a communiqué on non-negotiable key messages was produced.

The acknowledgement of intersectionality of poverty, the recognition of unpaid care and domestic work as an integral part of the urban economy, and the importance of women’s participation and leadership at all levels are just some of the priorities and non-negotiables we agreed upon.

4.30 pm, we finally had to leave the room, pleased with our progress but very aware that while the meeting may be over, the process is not. There will be more such meetings and discussions, and women of all backgrounds and experiences will continue to advocate for gender equality and empowerment of women in the New Urban Agenda and beyond.

On a personal level, I was thrilled to be a part of this Expert Group Meeting. I was in discussions alongside feminist icon Jan Peterson, who has fought for the engendering of urban development for years. I had the opportunity to hear first-hand from community leaders such as Rose Molokoane of Shack/Slum Dwellers International (SDI) on how to include grassroots organisations.

I was impressed by how international and inter-generational the inputs were, ranging from the experiences of women in Rwanda, Kenya, Iraq and India to the perspective of Hung Vo, a 21-year-old researcher committed to academic studies on gender. Hearing them speak inspired me and made me truly understand how important this shared goal of ours is.

I can’t think of a better way to spend a Sunday. 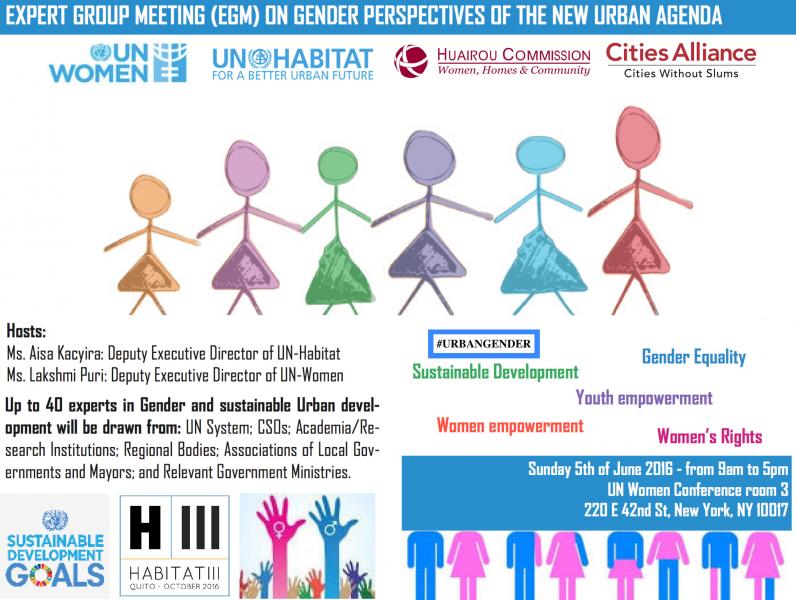 When I look around the room, I see community leaders, female researchers, UN officials and UN Deputy Executive Directors. Not a single one is happy to be seen as an add-on to vulnerable groups.