[24 August 2015] -- On 25 August 2015, the Ministry of Local Government and Rural Development in Ghana will host the country’s fifth National Urban Forum with the theme “Building Resilient Cities: Deepening Spatial Planning and Land Value Capture for Development in Ghana.” Cities Alliance is supporting the national urban forum through a grant to GIZ, the German Organisation for International Cooperation.

Cities Alliance spoke to Mr Sylvanus Adzornu, Head of Urban Development Unit at the Ministry, to gain some insight in the run-up to the forum.

Q: Can you explain the theme of the fifth National Urban Forum in more simple terms?

A:  The theme is focusing on how we can better apply spatial planning and land value capture. Spatial planning looks at how we use our land and what improvements can be made to manage land more effectively. Value capture is public financing that allows the government to recover some, or all of the value that public infrastructure generates for private landowners. The revenue generated can be used as infrastructure finance development to improve infrastructure within urban spaces and to promote stronger cities that can deal with climatic shocks and ensure that all inhabitants, irrespective of their social standing, can enjoy the benefits of our cities. The urban space should promote equity and fairness and ensure inclusivity for citizens. However this is not the case.

This forum will create a platform for all urban actors to remind themselves of the need for spatial planning and land value capture for infrastructure development as key elements in building resilient and sustainable cities. The theme for the forum is relevant to our cities today due to the increasing impact of climate change, such as the perennial floods in Ghana, which have constantly led to loss of lives and property. A deeper analysis of these tools will help us build cities that can stand up to the impact of climate change and reduce vulnerability, especially of the urban poor.

It is also a platform for advocacy to promote inclusive planning and effective urban land management aimed at reducing the upspring of slums and climate-related disasters such as floods.  It is also significant to note that the 2nd Phase of the Land, Services and Citizenship Programme, which is a significant programme funded by the Cities Alliance, will be re-launched at the forum. The Country Programme aims at supporting national and local policy dialogue to promote sustainable urbanisation, ensure the empowerment of local governments and reinforce the importance of active participation of the local poor in urban development.

I believe that committed implementation of urban plans by city authorities is also relevant to building resilient and inclusive cities: hence this forum to aid advocacy for widespread implementation of this approach in Ghana and other African countries.

Q. What has been the legacy of the previous National Urban Forums in Ghana?

A. In my opinion the previous National Urban Forums in Ghana led to a precedent of more advocacy in cities for the formulation and implementation of the Ghana Urban Policy and its Action Plan to improve city conditions.  The Ghana Urban Agenda has been accepted and witnessed commitment at the level of the Presidency.  H.E President John Dramani Mahama is now the champion of the new African Urban Agenda.

Before Cities Alliance we were focusing more on rural issues. However, now the importance of cities and the need to take advantage of urbanisation in building resilient cities is clear. In pursuit of the African Urban Agenda, Cities Alliance has initiated a Future Cities Africa project of which Ghana is a beneficiary.

These Urban Forums have also enhanced Ghana’s participation in global and regional urban platforms to build resilient and sustainable cities. There are a number of international platforms created to push the New Urban Agenda in which Ghana is participating, with support from Cities Alliance. These include the Preparatory Conference for Habitat III in Jakarta, Indonesia and Habitat III in Quito, both of which take place in 2016. There was also an initial Preparatory Committee meeting in Kenya in April this year with a major focus on urbanisation as preparation for Habitat III.

Q. Why did you invite missions from Liberia and Uganda to attend the fifth National Urban Forum?

A. Ghana, together with the aforementioned countries, are Cities Alliance partners. This gives us great leverage to share knowledge and experience towards improving urban management and slum upgrading.  We invited these countries to share their experience on urban planning. We hope their participation in the Ghana Urban Forum will be a platform for knowledge and experience sharing. These countries can adopt and implement similar initiatives and approaches in urban planning and land value capture as tools for slum and disaster prevention in African cities.

There will also be a representative from UN-Habitat participating in the National Urban Forum. UN-Habitat is promoting Planned City Extension in the town of Prampram in Ghana, which is a similar concept to spatial planning and land value capture. They will be able to present this at the forum and provide inputs to the discussion.

Q. What are your expectations for the fifth National Urban Forum?

A. First and foremost we expect all urban actors such as the traditional authorities, politicians, city authorities, technocrats, academia, civil society and a cross-section of the urban poor to gain diverse perspectives of urban issues in the country. At the end of this forum, city authorities and the government should be able to appreciate the need to deepen spatial planning and land value capture of their local plans and schemes as a means of leveraging financial resources to promote infrastructural development to the benefit of all citizens, especially the urban poor.

This forum will also trigger and create awareness on measures that can curb the perennial floods in Accra. The urban forum will highlight the need for authorities to commit to the implementation of spatial plans and projects in the urban space that aim to reduce vulnerability and increase resilience.

Going forward, it is expected that this forum, and subsequent ones, will deepen the commitment of authorities to finding lasting solutions to urban challenges. We hope that this will be done with the continued support of key partners such as Cities Alliance and GIZ, in promoting the New Urban Agenda after the United Nations Conference on Housing and Sustainable Urban Development (Habitat III) in Quito, Ecuador, in October 2016. 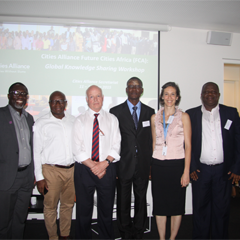 “Before Cities Alliance, we were focusing more on rural issues. Now the importance of cities and the need to take advantage of urbanisation in building resilient cities is clear.” -- Mr Sylvanus Adzornu, Head of Ghana's Urban Development Unit

Changing the Conversation on Ghana's Cities