Monrovia Mayor Clara Doe Mvogo shared her inspiring story of how the local government worked together with communities to halt the spread of the devastating Ebola virus, which lead to Liberia being declared free of Ebola.

[18 June  2015] – One of the highlights of the European Development Days (EDD) 2015 week in June was the presence of the Hon. Clara Doe Mvogo, Mayor of Monrovia, Liberia.

Delivering the keynote address at a pre-EDD reception the Cities Alliance co-hosted with BOZAR and the European Foundation Centre on 2 June, Mayor Mvogo spoke eloquently about how the 2014 Ebola crisis had a devastating impact on her city, and how the local government worked together with communities to halt the spread of the virus, which led to Liberia being declared free of Ebola.

It wasn’t an easy task.  When Ebola first began to spread in Liberia, there was denial at all levels – high-level government officials refused to acknowledge its existence, the medical community did not understand how to deal with the virus, and the city’s residents were not reached with awareness campaigns or messages urging them to take preventative measures.

As the death toll mounted, reality finally set in. Doctors and medical personnel flocked to Monrovia, Liberia’s urban centre and home to 40 per cent of its total population. Ambulances were everywhere and Liberia was virtually cut off from the rest of the world. It was the worst Ebola outbreak in Liberia’s history; some 4,000 people died of the virus, many of them women due to their traditional role as caregivers.

Struggling to cope with a disaster of this magnitude and with institutions still weak after 14 years of civil war that ended just over a decade ago, the national government shifted support for Ebola awareness and prevention to the community level. The Monrovia City Corporation (MCC), in partnership with UNICEF, Paynesville City and 120 communities within Greater Monrovia, led a community-driven initiative to combat the spread of Ebola at the grassroots level.

Through Operation Stop Ebola, community representatives were trained in how to raise awareness of Ebola at the community level. They went door-to-door with materials in hand, explaining the virus and how to take preventative measures. Slowly, new infections began to decline, and in May 2015 Liberia was declared Ebola-free by the World Health Organisation.

Mayor Mvogo noted that the Ebola crisis had taught the city some valuable lessons. She stressed that decentralisation is crucial to a sustainable future in Liberia; if local governments had the authority to address the Ebola outbreak in the beginning, they could have stepped in to  mobilise residents much sooner.

She highlighted the clear need for a stronger health care system, with more doctors, trained nurses and community clinics. When the Ebola virus broke out in 2014, the Liberian ambassador to the United States estimated that there were only 50 doctors in the entire country – one doctor for every 70,000 people. Education must also be a priority; a better educated population would have helped prevent the rapid spread of the disease.

Looking forward, the successful partnership between the Monrovia city government and communities in combating Ebola will serve as a good foundation for the Cities Alliance Liberia Country Programme, a long-term partnership that will support Monrovia in becoming more resilient and improving the living and working conditions of its poorest residents.

The Hon. Clara Doe Mvogo, Mayor of Monrovia, Libera at a reception hosted by Bozar and the Cities Alliance 2 June in Brussels. Photo: Antonio Amendola

The role of local authorities and urban poor groups in Monrovia in response to the Ebola crisis helped turn the trajectory on new infections. 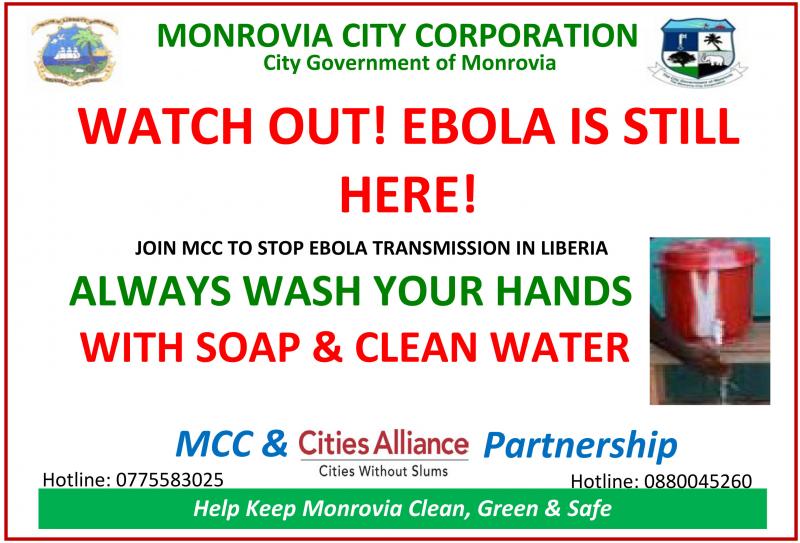