Future Cities Africa Is Off to a Strong Start

When the Cities Alliance and DFID first conceived the idea of Future Cities Africa, it seemed exceedingly ambitious: A multi-country partnership programme that challenges the way cities think about and plan for resilience, with an approach that is relevant for each city. Now one third of the way through implementation, Future Cities Africa is living up to its early promise.

[27 July  2015] – When the Cities Alliance and DFID first conceived the idea of Future Cities Africa, it seemed exceedingly ambitious: A multi-country partnership programme that challenges the way cities think about and plan for resilience, with an approach that is relevant for each city.

Now one third of the way through implementation, Future Cities Africa is living up to its early promise and already beginning to show concrete results.

Launched in December 2014, Future Cities Africa involves collecting data about a city and developing a risk assessment, which helps cities better understand the risks they face and target their interventions more effectively over the long term. It also includes the creation of a knowledge exchange platform so that participants can share their experiences and track their progress.

Initially designed to target at least eight cities, the Future Cities Africa initiative has been expanded to cover 21 – Accra and Tema in Ghana; Nampula, Nacala and Tete in Mozambique;  Mekelle and Dire Dawa in Ethiopia; and all 14 secondary cities in Uganda. These four countries were selected because the Cities Alliance already has an extensive Country Programme with built-in institutional partnerships in each one that can provide the foundation for Future Cities Africa.

A framework for city diagnostics

To kick off the programme, all of the cities held induction workshops where stakeholders came together to discuss the resilience challenges they face in five areas: Environment, Economy, Service, Citizenship and Governance.  The workshops helped participants identify the most important priorities to pursue with further diagnostics, and to develop a common understanding of what resilience means for their city.  For example, in Dire Dawa, Ethiopia, participants identified land use management as one of the key issues.

Complementing the risk assessments is resilience.io, an innovative decision-making tool that collects data on a city. Developed by The Ecological Sequestration Trust (TEST), resilience.io gathers data from a variety of sources – satellite and earth observation, as well as open government and crowd-sourced economic, social and environmental data – and brings them all together in one place.  Resilience.io is unusual in that it understands cities as systems and identifies links between the various sectors, a valuable contribution to resilience that has so far been missing.

Resilience.io is currently being tested in Accra as part of the Future Cities Africa programme. The platform concept was introduced at a workshop in March 2015, and participants identified the water, sanitation and hygiene (WASH) sector for the pilot. A working group has been formed in Accra to collaborate with the software development team to guide data collection and exchange views on requirements. A working prototype of resilience.io focused on the WASH sector is expected to be completed in May 2016.

The third component of Future Cities Africa is a platform to connect all participating cities and build capacity. Developed by Gaiasoft, the platform allows cities to track their progress and facilitate knowledge sharing. It is currently in the process of being populated, and initial versions are up and running in Ghana and Uganda.

Because replicability is a main part of Future Cities Africa, the knowledge platform is designed to be user-friendly tool that can be made available to any interested city and populated with local data.

In each city and country, Future Cities Africa is adapted to meet specific local needs; local forums held in each of the participating cities ensure that happens. Where possible, it also links in with an existing programme to help governments reach their goals.

For example, in Ethiopia, the Future Cities Africa initiative is linked with the government’s Ethiopian Cities Prosperity Initiative (ECPI), which aims to provide strategic guidance for cities as the country moves towards achieving its goal of middle-income status by 2025.

And in Ghana, Future Cities Africa is working closely with the Rockefeller Foundation’s 100 Resilient Cities (100RC) initiative, of which Accra is a member, to help reach all municipalities within Greater Accra. (The Cities Alliance is a 100RC partner.)

A work in progress

Future Cities Africa has a very ambitious timeline; participants and partners are seeking to achieve a lot in a short period of time. So far, there has been good, solid progress, although much remains to be done.

There has been a high level of buy-in for the programme at both the national and city level, and the strong engagement from Ministries has been very encouraging. This engagement is facilitated by a Future Cities Africa team based in each of the four countries.

A global workshop with mayors and practitioners from all Future Cities Africa cities was held in Brussels 11-12 June, and the enthusiasm among participants was palpable. It is clear that the themes of climate change, environmental risks and inclusive growth are resonating with national and local partners and getting positive traction.

Implementing Future Cities Africa has also had its challenges. As expected, it can be difficult to build a cohesive team approach across four very different countries, and to develop supporting tools that are easy to use and effective for a wide range of users with varying capacities. With so many partners and participants it can also be difficult to develop knowledge management and learning systems that bring them all together. Finally, managing the strong demand for Future Cities Africa engagement within the project’s financing and time frames has been challenging.

Overall, however, the Cities Alliance is very pleased with how the programme is progressing and the impact it is having on participants. After attending the June workshop in Brussels, the Hon. Isacc Ashai Odamtten, Metropolitan Chief Executive of Tema, Ghana, noted how excited he was to share knowledge with other African cities, and how the programme was changing his perspective on resilience:

“Through Future Cities Africa, Cities Alliance is encouraging us to reflect on how we strengthen ownership at the local level and how we develop cities with inclusivity, especially gender and those most disadvantaged, in mind.” 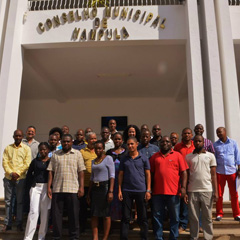 “Future Cities Africa is making a major contribution in my city, Tete, as it will help build the city’s resilience through city planning with a focus on sustainable development.” -- Mr Celestino António Checanhaza, Mayor of Tete Municipality in Mozambique