The world’s population is younger than ever before, with half of humankind under 25. The challenges posed by this youthful population are especially apparent in cities, where many youths lack opportunities and are increasingly marginalised. Empowering them is key to inclusive urban development.

[15 September 2010] -- The world’s population is younger than ever before, with half of humankind under the age of 25. Most of the world’s youth – some 85 per cent – live in developing countries, which are struggling to provide jobs and services for their burgeoning young populations.

This situation has been made even more difficult by the global economic crisis, which has disproportionally impacted young people and resulted in record unemployment among youths aged 15-24, according to the International Labour Organization.

In order to draw attention to the issue and highlight the important role youth can play in development, the United Nations has proclaimed August 2010-2011 the International Year of Youth. Activities were formally launched on International Youth Day, which is observed each year on 12 August. 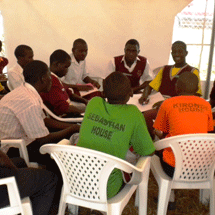 Youth centres such as this one sponsored by UN-HABITAT in Kampala, Uganda offer programmes on vocational training, classes on HIV/AIDS and gender awareness, and space for community meetings. Photo: Hilde Refstie/Cities Alliance

In his International Youth Day 2010 message, Secretary-General Ban Ki-moon called on nations to invest in their young people.

“As economies slowly begin to stabilise, the needs of young people should be paramount,” Secretary-General Ban said. “This is a moral imperative and a developmental necessity. But it is also an opportunity: the energy of youth can ignite faltering economies.”

The challenges posed by a fast-growing young population are particularly apparent in urban areas, where the so-called “youth bulge” – the number of youth aged 15 to 24 years as a percentage of the entire adult population – has increased inequality. Many cities are unable to provide their large youth populations with equal access to opportunities, and as a result young citizens are finding themselves increasingly marginalised without access to employment or quality education.

Despite a growing awareness of the issues surrounding urban youth, until recently there has been little data on the subject to guide policy makers. The UN-HABITAT State of the Urban Youth 2010-2011 report, the first of its kind by the agency, provides some much-needed data and information on urban youth. 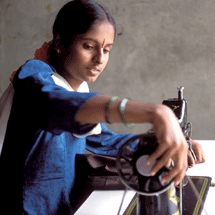 Young Indian woman being taught to use a sewing machine in class. Photo: John Isaac/World Bank

The report finds that many youths do not have equal access to political, economic, social and cultural opportunities in cities, leaving them idle, despondent and facing a bleak future.

This inequality begins in childhood and carries over into adulthood, perpetuating the disadvantages. In particular, access to basic education as well as the quality of the schooling impacts a young person’s prospects for income, employment and housing. By denying youth equal opportunities, cities are unable to tap into the potential that exists within their young populations and mobilise that talent for the benefit of society as a whole. Moreover, this inequality contributes to the growth of non-inclusive cities.

Themed “Leveling the Playing Field”, the report calls for policies, programmes, plans and businesses aimed exclusively at youth that focus on equalising advantages among young people across socio-economic groups and increasing the fairness of social processes.

While many countries and cities have youth initiatives, these programmes are often not broad enough to cover the array of deprivations in society.

The State of the Urban Youth report is based on a 2009 UN-HABITAT survey of the determinants of youth inequality and deprivation in five cities in Latin America, Africa, South Asia and the Caribbean: Rio de Janeiro, Brazil; Mumbai, India; Kingston, Jamaica; Nairobi, Kenya; and Lagos, Nigeria.

While national governments of the five cities included in the survey already have programmes directed at youth, beneficiaries in some of these cities say some adjustments to the plans are needed.

--  In Mumbai, India, respondents to the survey say the national Youth Policy should be participatory and more programme-oriented so that each state and city can develop complementary plans. India adopted the National Youth Policy in 2003 focusing on youth empowerment, gender justice, cross-sector approaches and information and research networks. Most states have yet to formulate their own youth policy to reflect the national policy.

--  In Rio de Janeiro, Brazil, the government hands over youth-dedicated resources to nongovernmental organisations. However, youth in Rio say the courses offered under government policies are either insufficient or sporadic, and out of touch with the market. Youth in Rio are demanding affirmative action in employment, as happens with some banks that set quotas for hiring people with disabilities and Afro-Brazilians. Youth-specific public policies are developed by various tiers of government – federal, state and municipal – but are implemented at the local level through partnerships between public authorities and civil society.

--  Lagos youth, in Nigeria, say although planning takes place at all three tiers of government, monitoring and evaluation of the degree and extent of implementation of the plans are never carried out. Young people do not see any drop in urban youth poverty because initiatives and continuity in programmes are lacking, and because the government does not involve the youth in programme design, leaving them with a bleak future. The National Youth Policy in Nigeria, which was last revised in 2001, is still to be endorsed and enacted in all the states of the Nigerian federation.

--  In Kingston, the Jamaican government developed a national Youth Policy in 1994 to empower 14 to 25-year-olds. A national survey is planned ahead of the development of a new 2010-2014 youth policy. The revision process includes youth organisations, NGOs and government agencies. Youth in Kingston are concerned about crime, violence, teenage pregnancy and parenting, gender disparities and their role in national unity. Jamaica inner-city youth say a major source of exclusion is the stigma attached to the place where they live. However, the survey findings show that part of the problem is with the youth who need to become more proactive in engaging with the government.

--  In Nairobi, Kenya, survey findings show that the difficulty of getting decent jobs is one of the major reasons for local youths’ poor access to opportunities. The Kenyan government set up the Ministry of Youth Affairs and Sports in 2005 to promote young people’s capacity to take part in national development through supportive policies and programmes. In 2009, the Ministry launched the ‘Kazi Kwa Vijana’ (work for young people) initiative so that young people could be given work in community projects such as water harvesting, repairing boreholes and roads, cleaning informal settlements and planting trees. However, the jobs are temporary and labour intensive, and many females are at a disadvantage. In January 2010 the President of Kenya signed a law establishing the National Youth Council, which will ensure that the youth agenda will be included in the formulation of policy by institutions.

Recommendations for policies aimed at youth

Based on the 2009 youth survey, the report establishes guidelines for cities and countries that are considering undertaking initiatives aimed at reducing inequality among youth. The main policy recommendations are:

3.)        Policies and resources must focus more on education, especially for young females.

5.)        Inequality of opportunity should receive special attention. Institutional mechanisms must be set up to mitigate the disadvantages resulting from predetermined circumstances – such as gender, race, ethnicity, region of birth, and disability – and reduce the effects of  intergenerational inequity, as parents who are educated are more willing to invest in their offspring’s education.

6.)        Youth education and training programmes should be matched to the skills in demand on the labour market.

7.)        Policies must espouse the multi-dimensional nature of youth opportunity. Cross-sector coordination with a focus on youth is needed, with national and local governments working alongside local leaders, communities and the private sector to implement effective programmes.

8.)        Systematic and consistent urban youth data must be collected.

9.)        Access to land and safe urban space is important for the protection, voice, and empowerment of urban youth. Young people need places where they are sheltered, protected and mentored into the democratic and economic processes.

10.)    Specific policies for shelter deprivation should be developed.

11.)    There is a need for better health policies. Improving shelter is important for improving health.