Cities Alliance: Supporting Transformation in the City of Mumbai

The Cities Alliance has had a long and successful relationship/partnership with the city of Mumbai, India. The major focus of the relationship has been support for an innovative programme to transform Mumbai into a world-class city.

[13 January 2010] -- In the next few days the city of Mumbai will host Cities Alliance’s 10th anniversary meetings.

Close to 100 participants comprising Cities Alliance member representatives, partners, high level government officials as well as local organisers will participate in what is billed to be a landmark meeting, which among other objectives also will take stock of how far the Alliance has come since its founding in Berlin in 1999, as well as deliberate on new directions for the Alliance moving forward.

The Alliance has had a long, successful relationship/partnership with Mumbai, the major focus of activity being support for an innovative programme to transform Mumbai into a world-class city.

Transforming Mumbai into a World-Class City

A massive initiative is currently underway to transform Mumbai, India’s financial and commercial centre, into a world-class city with a vibrant economy and a high standard of living for all citizens.

The initiative grew out of efforts by the private sector, which sought to make the city a better place to live, work and invest in. With that goal in mind, the citizen’s group Bombay First commissioned a report from international consulting firm McKinsey to create a vision for transforming the city. The initiative was subsequently endorsed by the government of Maharashtra, of which Mumbai is the capital; Indian Prime Minister Manmohan Singh; and the World Bank. 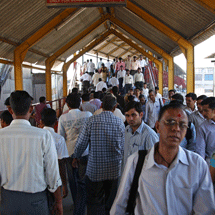 The Mumbai Transformation Programme includes more than 40 projects to spur economic growth in Mumbai, reduce poverty and enhance quality of life for residents, especially slum dwellers. The projects focus on physical and social infrastructure, environment, housing, governance, and strategic planning. They cover a wide range of activities, such improvements to the city’s ageing transport infrastructure and better health, education and job training services for residents.

--  The Dharavi Redevelopment Project to improve the lives of residents of Dharavi, one of Asia’s largest slums

--  The resettling of Mumbai’s pavement dwellers, who have built shacks on city streets

--  A programme to provide sanitation in the city’s slums

All of the projects that are part of the Mumbai Transformation Programme are coordinated and monitored by the Mumbai Transformation Support Unit (MTSU), which was established in 2005 as a special unit of the All India Institute of Local Self Government with the support of the Cities Alliance, the World Bank and USAID. The MTSU posts information about the progress of the projects on its website, www.visionmumbai.org.

Results on the Ground 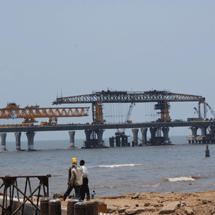 Currently, the initiative is in the second phase of implementation. Some of the tangible results achieved during Phase I (June 2005 to March 2008), results included:

--  Beautification of historic neighbourhoods and buildings, such as Marine Drive, the Gateway of India and Chhatrapati Shivaji Terminus

During Phase II, which lasts from April 1, 2008 to March 31, 2011, the focus is on additional detailed studies and implementing the action plan outlined in Phase I.

The Mumbai Transformation Programme supports and is supported by the Jawaharlal Nehru National Urban Renewal Mission (JNNURM), a flagship programme launched by the Indian government in 2006 to provide infrastructure financing as an incentive for urban reform.

The Cities Alliance has supported the Mumbai Transformation Programme from its early stages. As a significant urban initiative that attempts to tackle real megacity issues—particularly the living conditions of the urban poor—it is a natural fit for the Cities Alliance.

Since 2005, the Cities Alliance has provided $1 million in grant funds to support the transformation initiative, in addition to co-financing from the World Bank and local partners.

The MTSU has used Cities Alliance grant funds to initiate studies, base papers and policy papers for reforms in the areas of education, economic growth, governance, health, housing, transport, and a city business plan.

Cities Alliance grants will continue to support the operations of the MTSU during Phase II of the initiative. This period is expected to feature more coordination and consultation as the reforms and investments identified under Phase I are implemented.