Global celebrations for World Habitat Day 2010 kicked off in Shanghai, China with the theme "Better City, Better Life". Local events marking the day were also held in cities around the world.

[4 October 2010] -- The global celebration of World Habitat Day was celebrated with fanfare in Shanghai on Monday as China and UN-HABITAT feted the 2010 winners of Scroll of Honour Awards, the World Habitat Awards and China's own Habitat Environment awards.

"As our world grows predominantly urban, World Habitat Day provides an annual opportunity to reflect on how we can make our towns and cities better places for all," said UN Secretary-General Ban Ki-moon in a statement read on his behalf by Dr. Awni Behnam, Commissioner General of the United Nations pavilion at the Shanghai 2010 Expo.

With the Expo theme 'Better city, Better life', also chosen for to mark World Habitat Day, the highly publicised 2010 observance highlighted the actions and policies which can improve well-being for the millions and millions of people languishing in urban slums and other sub-standard housing around the world. 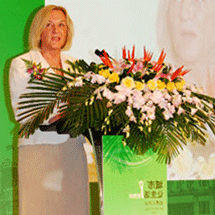 In keynote addresses the main hosts on Monday, Mr. Shen Jun, Deputy Mayor of Shanghai, and Mr. Qi Ji, Deputy Minister of Housing and Urban-Rural Developed both highlighted the progress China had made in providing as much housing as possible for those in need of shelter over the past 30 years. Addressing an audience that included several African mayors, both also offered to share the country's wisdom and know-how in housing policy with other developing countries around the world.

Ambassador Inga Björk-Klevby, Assistant Secretary General of the United Nations and Officer in Charge of UN-HABITAT, thanked the Chinese authorities in her keynote address for hosting the celebrations, and she also paid a special word of tribute to Dr. Behnam for making the UN pavilion such a success.

After the Chinese awards were handed out, Ms. Jane Nyakairu, Chief of UN-HABITAT's information service presented the 2010 Habitat Scroll of Honour winners, and Ms. Diane Diacon, President of The Building and Housing Social Foundation headquartered in the United Kingdom, honoured the winners of the 2010 World Habitat Awards.

In another highlight, UN-HABITAT launched its official Chinese-language website, sponsored by the Rizhao Municipality, a 2009 Scroll of Honour award winner.

Professor Mao Qizhi, Associate Dean of the Tsinghua University School of Architecture, launched an authoritative report, The State of China's Cities published jointly by UN-HABITAT, the China Science Centre of International Eurasian Academy of Sciences, and the China Association of Mayors.

Celebrations to mark the occasion were held in many cities around the world, including Barcelona, Nakuru in Kenya, Kathmandu and scores of other locations.

This item was first published 4 October 2010 on the UN-HABITAT website.