What happens when city enthusiasts from the richest to the poorest countries are put in a room to brainstorm on ways to use data to empower their cities and citizens? Cities Alliance attended the 2018 Uraia Citizenship Series two-day workshop to find out.

“What is the city but the people?”- William Shakespeare, Coriolanus

[5 June 2018] -- What happens when city enthusiasts from the richest to the poorest countries are put in a room to brainstorm on ways to use data to empower their cities and citizens? Cities Alliance attended the 2018 Uraia Citizenship Series two-day workshop to find out.

With big data, artificial intelligence and the Internet of Things penetrating various industries, it is only natural that they be harnessed to help manage rapid urbanisation. Countries around the world are tapping into technology to provide better services to their citizens. In some areas of the world there is an abundance of data, while others lack methods to even collect public data.

The workshop, hosted by the Brussels Capital Region in collaboration with Computer Centre for the Brussels Region (CIRB) 30–31 May 2018, provided a forum to discuss all things data.  It focused on global experiences and tools for using data to improve city management.

The schedule combined plenary sessions with in-depth debates in working groups, networking opportunities, and a field visit to innovative projects from Brussels and its partners.

The workshop brought together representatives from local governments, international and civil society organisations, research centres, private sector, and various ministries in charge of telecommunications. There were delegates from many countries including Germany, France, Nigeria, South Korea, Tunisia, the United States, ensuring a good mix of ideas and experiences.

--  The financial and economic impact of big and open data in cities
The speakers presented different technologies in place in their cities, the cost, the impact and the challenges. A representative from Seoul, South Korea talked about how public data is used to develop smart mobile applications for efficient public transport by providing citizens with real-time information about bus timings.

--  The impact of open and big data on the lives of citizens
Bringing in the citizen perspective, a representative from Tunisia showcased his project on smart dus  t bins that use sensors to detect the types of waste and when the bin reached its full capacity. The data is sent to a central database, thus helping in planning an efficient route for waste collection with full bins collected first.

--  Data as a meaningful instrument for city participation and city efficiency
While discussions had emphasised cities in developed countries, Cities Alliance, Head of Programme Unit, Julian Baskin brought in the perspective of leveraging data in the poorest countries of the world. He discussed the importance of community participation in collecting data and using the data for city efficiency. He addressed the issue of how to manage fast growing cities that do not have the systems and data to ensure effective planning and implementation.

On Day 2, working groups gathered to discuss solutions to the problems and challenges identified on Day 1. Various solutions were provided, such as training local government staff, encouraging start-ups and even funding new initiatives around collection and presentation of public data. The participants also debated initiatives that governments can take to encourage citizens to use open data for the public good.

The workshop concluded with a Smart City tour of Brussels that gave participants a chance to see the various smart initiatives implemented in the Brussels-Capital Region. These included:

--  Intelligent traffic lights that adapt themselves based on the traffic and are programmed to prioritise the fire brigade, ambulance and public transport.

--  Intelligent cameras that can read number plates and support in detecting cars with high emission rates.

--  FixMyCity, a smart app used by the citizens of Brussels to report civic issues and help improve the city’s public spaces.

--  A 30-storey Smart Building with no windows that regulates the indoor temperature based on weather conditions and is highly energy efficient.

While the workshop had several presentations on smart cities in developing and developed countries, Cities Alliance’s work in secondary cities provided a unique angle to the importance of data for local economic development. Speakers highlighted the importance of collecting and using data for city efficiency, and Cities Alliance Head of Programmes Julian Baskin noted  that data alone is not enough. Data must be combined with an understanding of context and how to use it to create knowledge.

Cities Alliance supports cities to create this knowledge. Our programmes help cities work in partnership with communities to bring in participatory data that can be transformative. One example is the #KnowYourCity campaign we supported with Slum Dwellers International (SDI) and United Cities and Local Governments Africa (UCLGA). It has brought together communities and mayors to use community-collected data for improving the living conditions of slum dwellers. For any city to be smart, it must work in partnership with its communities. 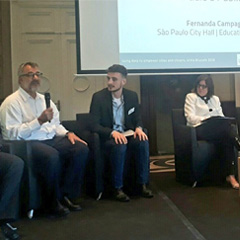 Julian Baskin (left), Head of Programmes at Cities Alliance, stated that data alone is not enough; it must be combined with understanding to create knowledge.

“Data is the new oil, and thus data like oil, needs to be refined. However, data, unlike oil, is infinite.” –Keynote speaker Petr Suska, Fraunhofer IAO