Since 2000, AVSI has worked with Cities Alliance to implement groundbreaking integrated urban upgrading and capacity building projects, first in Salvador de Bahia, Brazil and later in Maputo, Mozambique. This collaboration brought a deeper understanding of Cities Alliance’s methods and approach, ultimately leading to a formal request for membership.

This article is the part of a series of features introducing new members of the Cities Alliance.

Bringing civil society organisations to the forefront of development, with a focus on human dignity.

[18 March  2016] – In November 2015, we were delighted to welcome the AVSI Foundation, a longtime partner, as a formal member of Cities Alliance.

Founded in Italy in 1972, AVSI is an international not-for-profit NGO that aims to promote the dignity of the person through development cooperation activities, with special attention to education, according to the social teaching of the Catholic Church.

Since 2000, AVSI has worked with Cities Alliance to implement groundbreaking integrated urban upgrading and capacity building projects, first in Salvador de Bahia, Brazil and later in Maputo, Mozambique. This collaboration brought a deeper understanding of Cities Alliance’s methods and approach, ultimately leading to a formal request for membership.

By joining Cities Alliance, AVSI is seeking to expand its approach on urban upgrading and learn from the experiences of other Cities Alliance members.

In turn, AVSI brings to the partnership 40 years of experience in development, especially its deep understanding of the crucial role played by civil society organisations. AVSI is strongly engaged with grassroots organisation and local communities and is able to reach the poorest and most marginalised populations, which it calls the “last mile” of development.

Through working closely with local people and organisations, AVSI has learned that civil society organisations are among the best way to respond to people’s needs. It is eager to share its experiences, especially at the institutional, public and private levels, to promote a culture of real sustainable development that reaches the very last person. Becoming part of Cities Alliance is a great opportunity to foster this approach and bring a mentality of inclusion to development.

Seeking the human dignity in development

And this is at the core of what AVSI brings to the Cities Alliance partnership: An integrated vision of development centred on the person and human dignity.

Cities are often viewed as spaces where people live and develop themselves, where the slums are areas that need to be integrated into – and not segregated from – the city. Generally, people in slum areas and other fragile groups in society are perceived as a “social cost” or a “burden” instead of as a resource for the future.

AVSI’s vision of the city deals with the many challenges that need to be faced in order to provide adequate services for the development of people. This involves:

--  Adjusting the urbanisation process to the constant flow of migration flow; and

--  In addition to its people-centred approach, AVSI also brings a host of experiences to the Cities Alliance partnership. These include:

--  Greater attention to the issue of business and development; AVSI has experience in Public Private Partnership in various sectors (utilities, education, vocational training, etc.) as well as in Business and Human Rights that can enhance partnerships with the private sector for sustainable development of cities

--  New strategies for investing in civil society organisations and encouraging them to participate in the design and implementation of public policies, as well as real action for urban development.

In keeping with its focus on human dignity, AVSI takes an upgrading approach that integrates physical infrastructure rehabilitation with socioeconomic support for the community, building the human and social capital necessary for long-term sustainability. It is a participatory approach that supports and strengthens local associations, intermediary bodies, and public and private providers serving the neighbourhoods – promoting their integration into the surrounding city.

The success of AVSI’s approach is especially evident in Brazil, where the foundation worked closely with Cities Alliance, the state government of Bahia, the World Bank and the Government of Italy on an integrated slum upgrading activity in Salvador de Bahia.

With technical assistance from AVSI, more than 70 local community-based associations were mobilised in Salvador de Bahia, improving public participation and establishing a dialogue between the community and public authorities.

After years of fine-tuning, the methodology developed in Bahia was instrumental in preparing national guidelines and a toolkit to improve the social aspect of housing and slum upgrading projects used throughout Brazil.

The methodology developed in Bahia is now being applied in Maputo, Mozambique, where AVSI is implementing several pilot projects to promote integrated, participatory upgrading in informal settlements.  The most significant is upgrading in the Chamanculo-C neighbourhood of Maputo, a project that is being undertaken with support from Cities Alliance, the World Bank, and the Italian and Brazilian governments.

In Chamanculo-C, AVSI is providing technical assistance to the Municipality of Maputo to implement a strategy for reordering and urbanising informal settlements. It involves building infrastructure and ensuring housing maintenance along with health care, education and social activities that support the individual and engage local communities. A key component is developing partnerships between institutions and strengthening existing local associations and informal groups.

AVSI is also supporting an Integrated Development Plan that aims to equip Maputo with the necessary tools to grow its economy, reduce poverty and social inequality, manage urbanisation in an environmentally sustainable manner, preserve its urban cultural heritage, and promote good governance for current and future generations.

More details are available at the following links: http://mocambique.avsi.org/2014/04/16/projecto-de-cooperacao-tecnica-trilateral-apoio-a-requalificacao-do-bairro-de-chamanculo-c/ 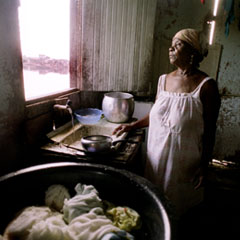 AVSI and Cities Alliance helped more than 70 local community-based associations were mobilised in Salvador de Bahia, improving public participation and establishing a dialogue between the community and public authorities.

The successful collaboration between AVSI and Cities Alliance in Brazil has been documented in the publication The Story of Integrated Slum Upgrading in Salvador (Bahia).

The Story of Integrated Slum Upgrading in Salvador (Bahia)