A Friend in the North: Reflections on a Decade of Norwegian Support for the Cities Alliance

[10 April 2013] -- When Erik Berg clears his throat to speak, people pause and listen. He has been an institution at the Norwegian Ministry of Foreign Affairs, where he served as Senior Adviser. A longtime friend and supporter of the Cities Alliance, Erik has over the years become known as a persistent advocate for a partnership approach to the challenges and opportunities of urbanisation faced in the Global South.

Given that he is now beginning a well-deserved retirement, we wanted to hear from him how he has perceived the partnership over the years.  Former staff member Hilde Refstie, who spent two years with the Cities Alliance as part of the Young Professionals initiative sponsored by Norway, caught up with Erik to get his thoughts on the strengthened nature of the Cities Alliance partnership and its future role.

Some of his key observations are:

--  With its diverse range of members, the Cities Alliance has the unique capacity to bring together stakeholders at the international, national and local level in constructive dialogue and search for development solutions.

--  The Cities Alliance has the opportunity to take a leading intellectual role in urban development and serve as a voice for emerging players—such as global cities, neighbourhood organisations, and corporations—where innovative thinking on urban development is happening.

vThe Cities Alliance can, through its networks, be an important player in setting the future agenda for the international urban discourse; there is, however, a dire need in the Alliance for increased financial resources to strengthen its leading role.

You have been in this field for  a long time. What motivated you to work with urban development and poverty in the first place?

Since my days as a graduate student of modern history in the early 1970s, I have learned to see cities as the place where currents of social and political change rise to the surface. Cities have always been centres of capital accumulation and regulate access to global resources. They are thus the frontline for struggles over who dictates the quality and organisation of daily life. I think the global challenge of today is whether it will be financiers or people who set the priorities. And where else can we come together to articulate our collective cries and demands than in the cities? As pointed out by Thomas Hodgkin in his thought provoking treatise “Nationalism in Colonial Africa”: “Cities contain the germs of a new, more interesting civilization with possibilities of greater liberty”. This was food for thought for a 25-year-old student.

You have been a good friend to the Cities Alliance over the years. Why do you think the partnership is so important?

Looking at the practices and policies of the so-called donor countries of Western Europe and North America, their lack of interest and understanding for international urban and regional development is stunning. What is even worse is that this lack of interest and priority is also reflected within and among civil society organisations—both within service delivery as well as advocacy. Some “friends of the cities” do exist, however, and many of them meet in the Cities Alliance.

Given this situation, the Cities Alliance is unique because of its forum function and convening power both on the international, the national and the local level. It brings stakeholders together in constructive dialogue and quest for development solutions. It includes partner states in the North as well as in the South,  World Bank and UN organisations, leading international organisations of local government, a multitude of slum dwellers associations and of course city authorities/local governments. The Cities Alliance’s potential for immediate action and flexibility is considerable. With the envisaged strengthening of its financial and human resources, the Cities Alliance can, through its networks, be an important player in setting the future agenda for the international urban discourse, for instance in the preparations leading up to Habitat III in 2016. There is, however, a dire need in the Alliance for increased financial resources to strengthen its leading role.

What has been your most important message to the partnership over the years?

With the support of Sweden and Germany and a positive attitude on the part of the Secretariat, we managed to initiate a process at the Consultative Group meeting in Barcelona in 2008 that led, among others, to the development of a new Charter and a new business model. A positive, participatory process emerged that led to a much more unified and enthusiastic Cities Alliance. In line with Norwegian policy priorities, I would also like to mention that we have spearheaded urban gender issues, the climate challenge and not the least the situation of urban youth.

What is your most memorable moment from your years with the Cities Alliance?

Having participated in the Consultative Group meetings since 2006 and been a member of the Executive Committee for five years, there is of course a “stream” of memorable moments. But looking back, the most memorable moment was probably the CG meeting in Barcelona in 2008. The reform process initiated by Sweden, Norway and Germany gave a critical analysis of the situation. Our criticism was blunt, the tone was negative and the atmosphere became antagonistic. Manager Billy Cobbett in an impressive manner turned the negativity around into an open and democratic dialogue process. Clare Short, chair of the Public Advisory Group, also contributed considerably to an amicable solution.

How has Norway's support helped the partnership evolve?

It is said about Norwegians that we do not converse, we ask questions. In the context of the Cities Alliance we have continuously asked questions over the years, many of them critical as part of a dialectic and hopefully didactic process. Secondly, Norway stands out over the years as the largest core supporter of unmarked unconditional funds after the World Bank. This signifies trust in the Alliance’s work programme and the Secretariat’s way of handling things. Such support could constitute a challenge when our Parliament asks for clear, measurable outputs and outcomes, but is solved in the way the Secretariat is increasingly reporting at the joint Alliance level.

What do you hope the future brings for thew Cities Alliance?

What do you plan to do in your retirement?

On my retirement date of 1 January 2013, I became a board member of a new foundation called Shelter Norway. Its main purpose will be to try to transform (not transfer) the Norwegian cooperative housing model in partnership with interested development partners in the South where relevant. Housing finance—one of the main causes of the present financial crises—has been given surprisingly little attention by multilateral development and finance institutions. For Shelter Norway, it represents more of a solution than a problem.

This comes in addition to the three F’s: family, football and fly fishing. 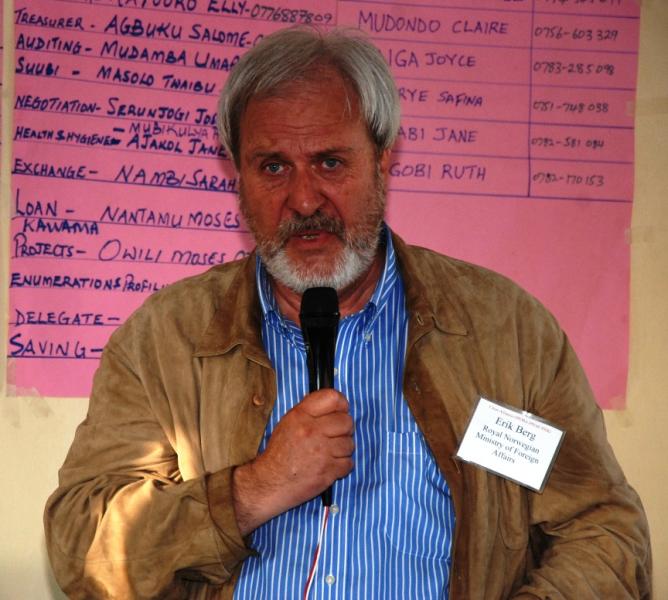 Erik Berg at the opening of the Jinja Sanitation Unit, June 2012.

“If the Cities Alliance didn’t exist, it would have to be invented.”-- Erik Berg

"A dedicated professional that embodied the best of international development, Erik ensured that we stayed focused on urban poverty in general, and women and youth in particular. He was a model partner for the Cities Alliance, and a great representative for Norway." -- William Cobbett, Cities Alliance Manager 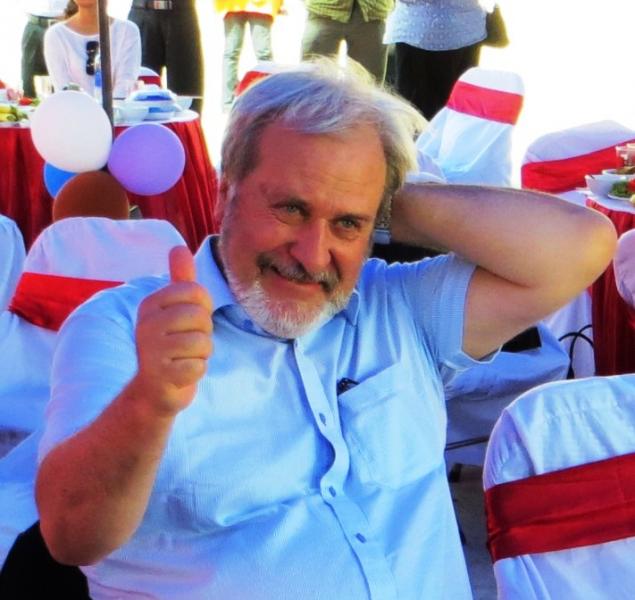 Erik Berg at the 2012 Consultative Group meeting in Vietnam.