Cities Alliance is delighted to welcome the World Bank back to the partnership, as well as four new members: the Commonwealth Local Government Forum (CLGF), Omidyar Network, Women in Informal Employment: Globalizing and Organizing (WIEGO), and the United Nations Capital Development Fund (UNCDF).

[27 July  2015] – The Cities Alliance is pleased to announce that five new members have formally joined the partnership.

The Cities Alliance’s membership drive was boosted by decisions taken by the Management Board this past May.  The Board endorsed our new membership strategy, which provides a clear mechanism for the Cities Alliance to attract new members that represent the diversity of interests now engaging with city issues internationally.

We are delighted by the World Bank's decision to rejoin, following our membership and governance reforms. As the previous home and host of the Secretariat, the World Bank has always had a central role in the Cities Alliance. Recently, the Government of Chile also rejoined the partnership, which is especially welcome in advance of the Habitat III conference to be hosted in the region.

In addition, we welcome three new members: the Commonwealth Local Government Forum (CLGF), with whom we have often collaborated; Omidyar Network, which becomes the first member from the Private Sector and Foundations constituency; and, finally, Women in Informal Employment: Globalizing and Organizing (WIEGO), which will bring welcome attention to the productive side of the informal economy in general, and the role of women in particular.  We also have great pleasure in welcoming the United Nations Capital Development Fund (UNCDF), which has joined as an Associate Member.

Based in London, CLGF works with national and local governments to support the development of democratic values and good local governance within the Commonwealth, a voluntary organisation of 53 independent countries across Asia, Africa, the Americas, Europe and the Pacific.

CLGF is an important advocate for the role of local government at the international level, and will be a welcome addition to the Cities Alliance’s advocacy efforts on behalf of cities leading up to Habitat III. The organisation also facilitates knowledge exchange related to decentralisation and local governance; supports projects aimed at building capacities of local governments; and provides a strong network of members who are well-placed to influence policy development.

The first private sector organisation to join the Cities Alliance, Omidyar Network is a philanthropic investment firm that aims to create opportunity for people to improve their lives by investing in market-based efforts that catalyse economic and social change.

Omidyar actively seeks to strengthen the relationship between citizens and their governments through an approach that focuses on participation and openness. It works with civil society organisations and innovative start-ups that define best practices for what information governments disclose and how it is reported, as well as independent journalism and citizen-based efforts to monitor and report on government actions.

Omidyar also focuses on supporting property rights for individuals, businesses, groups, and communities through technology that improves the way property rights are identified, publicised, and protected. Another focus area for Omidyar is financial inclusion and making basic financial services available to people who typically have not been able to access them.

Women In Employment: Globalizing and Organizing

WIEGO is a global network focused on securing livelihoods for the working poor, especially women, in the informal economy. It creates change by building capacity among informal worker organisations, expanding the knowledge base, and influencing local, national and international policies. Members include membership-based organisations of informal workers, researchers and statisticians, and practitioners from development agencies.

Through its focus on the livelihoods of the working poor in cities, WIEGO brings a fresh perspective and expertise to the Cities Alliance partnership and its approach to urban development.

In addition, WIEGO actively supports urban policy through a core programme that aims to enable the participation of informal economy workers in research and dialogues that achieve positive changes to city-level regulations. As a member of the Cities Alliance, WIEGO seeks to create additional opportunities to work for such change, including access to municipal authorities and the mobilisation of financial resources.

Check out WIEGO’s portal on Inclusive Urban Planning for Informal Workers at  www.inclusivecities.org.

The World Bank is a vital source of financial and technical assistance to developing countries around the world. It comprises two unique development institutions owned by 186 member countries—the International Bank for Reconstruction and Development (IBRD) and the International Development Association (IDA).

With the Cities Alliance’s new governance structure now set, the World Bank is reengaging with the partnership to support its urban programmes.

UNCDF is the UN’s capital investment agency for the world’s 48 least developed countries. It creates new opportunities for the poor and small businesses by increasing access to microfinance and investment capital. UNCDF focuses on Africa and the poorest countries of Asia, with a special commitment to countries emerging from conflict or crisis. 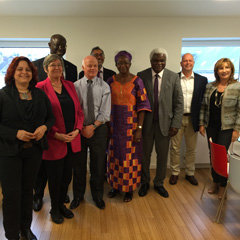 “Each of these new members brings a range of insights and expertise to the Cities Alliance, which emerges greatly strengthened through their joining. We look forward to their active engagement in the partnership.”  -- Cities Alliance Director William Cobbett