Cities Alliance rallied behind the message of strengthening local government in Africa at the 7th Africities summit in Johannesburg, South Africa from 29 November to 3 December 2015.

[11 December  2015] – Cities Alliance rallied behind the message of strengthening local government in Africa through its participation at the 7th Africities summit which took place in Johannesburg, South Africa from 29 November to 3 December 2015 under the theme “Shaping the Future of Africa with the People.”

In addition to this, Cities Alliance held two open sessions on Youth and the City: Youth Participation towards Inclusive Cities in Africa (with UN-Habitat) and Local Governance and the Role of Inclusive partnerships for the Implementation of the New Urban Agenda (with Development Partners Network on Decentralisation and Local Governance, DeLoG).

Cities Alliance’s participation at the Africities summit ended on a high note with a political debate on Donors and Development Partners, organised with DeLoG, and skillfully moderated by Clare Short, Senior Policy Advisor for Cities Alliance.

The overall tone of the summit was one of optimism and opportunity for Africa, but with a concerted call for local governments to be supported to better serve their citizens. William Cobbett, Director of Cities Alliance spoke to CNBC Africa at the Cities Alliance booth about the need to create a policy shift in many African countries in order to address the issue of slums and informal settlements. “Most local governments do not have the capacity or the data to be able to properly manage the urban land market and land administration. This is a big obstacle,” he said.

The Cities Alliance booth, which enjoyed a prominent position at the Sandton Exhibition Centre, featured striking photographs with thought-provoking messages on young people as Africa’s greatest resource and recognition of the informal sector in Africa. Visitors to the booth obtained information on Cities Alliance’s programmes and funding opportunities and Cities Alliance members used the booth as a meeting space, while various media outlets used it as a backdrop for interviews.

"Africa will not develop without its youth"

Day one of the summit adopted the theme of young people in Africa and this theme was echoed through the many sessions held at the summit. Nowhere was this theme most prevalent however, than at the Cities Alliance open session on Youth and the City. This dynamic session was preceded by South African melodies sung in powerful unison by Slum Dwellers International (SDI).

Jean-Pierre Elong-Mbassi, Secretary General of United Cities and Local Governments of Africa (UCLG-A), addressed the packed room with these words, “Africa will not develop without its youth. The best asset that the local governments have are its people; and among these people, its youth”, he said.

“We train young women for three months and then support them to build their own income generating initiatives. We are bringing issues of women to the forefront. We need gender equality. We cannot change the whole world, but we can definitely make a difference,” Shamim said to the captivated audience.

Cities Alliance’s partnership was reinforced at Africities through SDI’s launch of the Know Your City Campaign and UCGL-A’s official launch of the 2015 edition of Assessing the Institutional Environment of Local Governments in Africa. Both launches were held at the organisations’ booths at the Sandton Convention Centre.

Check out videos from Africities on our YouTube page: 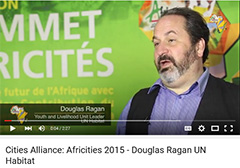