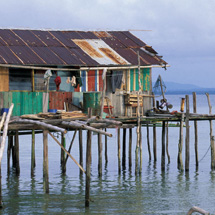 The Cities Alliance will co-finance an initiative by the government of Indonesia to develop a national slum upgrading policy and action plan that address the needs of the poor living in urban slums.

Although the government has invested in various slum upgrading projects in the past, slums have continued to expand as a result of rapid population growth in urban areas and high poverty rates. The situation is likely to continue; according to current trends, some 60 percent of Indonesians will live in urban areas by 2025, compared to 39.3 percent in 2000.

The initiative is expected to raise awareness about the scale of the slum problem in Indonesia and establish a clear national policy framework for coordinating slum upgrading efforts.

The primary objective of the initiative is to develop a national slum upgrading and slum prevention policy and strategy that will define the role of the national government so that it can enable local governments to promote the upgrading of existing slum settlements and put in place policies and programmes to adequately house growing urban populations.

The initiative aims to address the needs of the poor living in urban slums in three main areas:

The policy and action plan will be included in the government’s Mid Term National Plan 2010-2014, which is expected to be launched in 2010.

The Cities Alliance will contribute $500,000 towards the activity, which will be implemented by the Indonesian Ministry of Housing. The proposal was submitted by the Ministry of National Planning (BAPPENAS) with the sponsorship of the World Bank, UN-HABITAT, and the Australian Agency for International Development. It was formally approved by the Cities Alliance Secretariat on 29 October 2009.