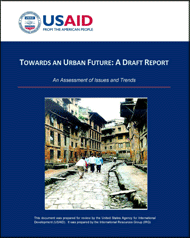 [16 February 2011] -- The US Agency for International Development (USAID) Urban Programs Team is developing new technical resources and programming approaches to help the organisation respond to a rapidly urbanising world.

As part of that effort, the International Resources Group (IRG) has developed a draft report to help the Urban Programs team focus its technical direction and leadership.
The report takes, as a starting point, the fact that over half of the world’s population now lives in urban areas for the first time in history and that, due to economic and social globalisation and rapid economic growth in the developing world, the engines of economic development in most of the world’s countries will be its towns and cities.
It notes that the challenge facing USAID, and other donors, is to make effective use of the urban landscape and its relative concentration of human and financial resources and infrastructure to better enable cities to serve as engines of growth for their own citizens as well as rural populations.
The report includes the following recommendations for USAID:
The report was presented at an event on 16 February 2011, which also featured the launch of the revamped Making Cities Work website, www.makingcitieswork.org.

Download the Executive Summary of Towards an Urban Future: A Draft Report (466 KB