Arrival City: How the Largest Migration in History is Reshaping Our World 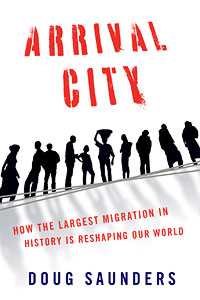 Arrival City: How the Largest Migration in History is Reshaping Our World by Canadian journalist and author Doug Saunders examines how the movement of populations from rural to urban areas on the margins is reshaping the world and the resulting opportunities for cities.

In the book, Saunders argues that the 21st century will be remembered for the final shift of human populations from agricultural life to cities, the effects of which are being felt around the world. This migration is unfolding around the world, from Istanbul to Toronto, from Warsaw to Mumbai, from Nairobi to Shenzhen, and it has profound implications for the success of local, national, and international economies. Many of these arrival cities and their denizens are overlooked, willfully ignored, or even bulldozed.
Saunders introduces readers to the migrants themselves, and with the aid of their stories elucidates their essential part in the economic fabric. He makes clear that the cities and nations that provide citizenship and opportunity to migrants stand to benefit as the migrant class evolves into a middle class, and he explains why those that ignore these people will see increased social unrest, poverty, and religious fundamentalism.
As Saunders shows, this is a profound mistake. Successful arrival cities create prosperous middle classes; failed arrival cities create poverty and social problems. Saunders shows how so many conflicts, revolutions and political crises have grown directly out of unsuccessful arrival cities, from Paris in 1789 when rural migrants rose up against food shortages and poverty; to Tehran in 1978, when the revolution began with non-Islamist migrants; to the suburbs of Paris and Berlin, where disaffected migrants have led uprisings or resorted to Islamic fundamentalism.
The key, Saunders argues, is to see the opportunity of these arrival cities. By providing citizenship, a chance to own property, education, transportation links, and good security, cities like São Paulo in Brazil, or Parla in Spain, local and national governments have succeeded in successfully integrating their migrants.