Cities Alliance and the World Bank, in partnership with the Lincoln Institute of Land Policy will on 27 January 2011 present groundbreaking new research on urban expansion titled "Making Room for a Planet of Cities" by Shlomo Angel with Jason Parent, Daniel L. Civco and Alejandro M. Blei.

[20 January 2011] – Cities Alliance and the World Bank, in partnership with the Lincoln Institute of Land Policy will on Thursday, 27 January 2011 present groundbreaking new research on urban expansion titled,  Making Room for a Planet of Cities, a Policy Focus Report by Shlomo Angel, with Jason Parent, Daniel L. Civco, and Alejandro M. Blei published by the Lincoln Institute of Land Policy.

Lead author Shlomo Angel, visiting fellow at the Lincoln Institute www.lincolninst.edu, will present analysis of  the quantitative dimensions of past, present, and future global urban land cover to suggest a new paradigm for preparing for explosive growth in cities the world over, particularly in the developing world.

Over half the world’s population lives in urban areas, including millions in informal settlement. Shlomo’s team has carefully selected metrics measured in four new data sets with ArcGIS software to provide a comprehensive and consistent global and historical perspective on urban expansion:

Key findings show that on average, densities in developing countries are double those in Europe and Japan, and densities in Europe and Japan are double those of the United States, Canada, and Australia; and that on average, the annual growth rate of urban land cover was twice that of the urban population between 1990 and 2000. Most of the cities studied expanded their built-up area more than 16-fold in the twentieth century. At present rates of density decline, the world’s urban population is expected to double in 43 years, while urban land cover will double in only 19 years. The urban population of the developing countries is expected to double between 2000 and 2030 while the built-up area of their cities can be expected to triple. 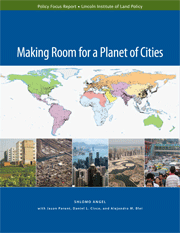 The research suggests that preparation for the sustainable growth of cities in rapidly urbanizing countries should be grounded in four key components: the realistic projections of urban land needs; generous metropolitan limits; selective protection of open space; and an arterial grid of roads spaced one kilometer apart that can support transit.

Making Room for a Planet of Cities  provides both the conceptual framework and, for the first time, the basic empirical data and quantitative dimensions of past, present, and future urban expansion in cities around the world that are necessary for making minimal preparations for the massive urban growth expected in the coming decades.

The launch which will take place at the Eugene Black Auditorium is open to external participants. Registration is required for participation. For more details please send an email to Neelam Tuteja at ntuteja@citiesalliance.org

About the Lincoln Institute

The Lincoln Institute of Land Policy http://www.lincolninst.edu/ is a leading resource for key issues concerning the use, regulation, and taxation of land. Providing high quality education and research, the Institute strives to improve public dialogue and decisions about land policy. As a private operating foundation, whose origins date to 1946, it seeks to inform decision-making through education, research, policy evaluation, demonstration projects, and the dissemination of information, policy analysis, and data through publications, the Web site, and other media. By bringing together scholars, practitioners, public officials, policymakers, journalists and involved citizens, the Lincoln Institute integrates theory and practice and provides a nonpartisan forum for multidisciplinary perspectives on public policy concerning land, both in the U.S. and internationally.