Cities Alliance has published its Annual Report for 2016, which highlights a truly exceptional year for the organisation with achievements in many areas – programmes, partnerships, global advocacy, and governance.

[5 April 2017] -- Cities Alliance has published its Annual Report for 2016, which highlights a truly exceptional year for the organisation with achievements in many areas – programmes, partnerships, global advocacy, and governance.

These Land, Services and Citizenship (LSC)  programmes spanned five countries, 53 cities or municipalities, and benefitted some 1.5 million slum dwellers (directly and indirectly). They also marked a decisive shift in the Cities Alliance’s move towards a longer-term, more effective approach to development.

Here are some highlights of the LSC achievements:

--  Leveraged funds. The original $15 million grant from the Gates Foundation has directly and indirectly leveraged over $700 million in investments from major development organisations for cities and services, and just over $9 million in co-financing from Country Programme partners.

--  Created coherence of effort. The Country Programmes have mobilised wide Cities Alliance membership involvement, with 12 members strategically and operationally engaged through the course of the programme. The coherent institutional framework further facilitated the participation of more than 70 non-member partners – evidence that the LSC partnership methodology is successful in creating coherence of effort.

--  Provided training at all levels. LSC developed training programmes for national government, city government and urban poor communities with potential for replication. 96 training workshops and 34 exchange missions have been organised and more than 3,600 people trained, including representatives from government ministries, local government officials and technical staff, CBOs, and community leaders.

--  Mobilised slum dwellers. At least 386 community savings groups have been created and strengthened through the LSC programme. Slum dweller federations in Burkina Faso, Ghana, Uganda, and Vietnam are actively engaged in local-level dialogue with government and other stakeholders.

--  Created space for dialogue. 43 Municipal Forums have been established.

At the same time, the new Liberia Country Programme has taken off and is already making noteworthy progress. Its 2016 activities focused heavily on building an urban poor federation in Monrovia – a nascent slum dweller federation has been established and is developing closer ties with city officials, who are beginning to depend on data collected by slum dwellers to make cases for issues in the city. City officials are accepting the federation as a medium for discussions between slum settlements and city governments, and township commissioners and the profiling team are working together to organise town hall meetings with community leaders.

It was also the final year for our Future Cities Africa programme, undertaken with funding from the UK Department for International Development (DFID). Future Cities Africa has equipped the partnership with a proven approach, rigorous analysis, and a set of relevant tools that can help support African cities to manage urban growth in a way that enables social inclusivity, economic growth and effective mitigation and adaptation against climate change. Its outputs included a feasibility study, critical research, digital tools, and innovative studies and tools.

The Equitable Economic Growth JWP devoted its first year to exploring and mobilising support for its fundamental mission and approach: To foster equitable economic growth through improved access to public goods and services in cities. It held a Global Policy Dialogue, produced knowledge products, and kicked off its Equitable Economic Growth City Campaign, in which JWP work with campaign cities on local initiatives.

The JWP for Habitat III culminated nearly three years of work crafting and delivering a common set of priority messages to influence the Post 2015 and New Urban Agenda. A survey conducted among members found the JWP to be a great success, crystallised in the clear and unambiguous recognition of the role of cities in development at the Third United Nations Conference on Housing and Sustainable Urban Development (Habitat III) in Quito and in the adoption of the New Urban Agenda.

The Gender JWP was also heavily engaged in influencing the New Urban Agenda. It organised and participated in in numerous activities and dialogues to help ensure that gender was embedded in the New Urban Agenda, including Expert Group Meetings to provide feedback on the various agenda drafts.

The Resilient Cities JWP had a strong 2016. It engaged in three major new projects and participated in global international events, including Habitat III and COP22, to highlight the importance of city resilience. In September, it welcomed the International Institute for Environment and Development (IIED) from London, bringing total membership to 16 members, five observers and two knowledge partners, and broadening the Cities Alliance’s partnership engagement.

Highlights of the Assembly included the election of Mayor of Dakar Khalifa Sall as President, and The Right Honourable Clare Short, United Kingdom’s former Secretary of State for International Development, as Chair of the 12-member Management Board. 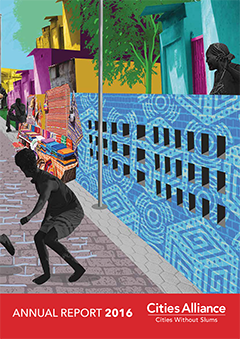