The World Bank launched a new Urban and Local Government Strategy in Singapore 11 November. The strategy calls for a broader-based, scaled up approach to urban poverty and seeks to help governments at all levels make cities more equitable, efficient, sustainable, and environmentally friendly.

Since the World Bank released its last urban strategy in 2000, the world has undergone a massive demographic shift. Rapid urbanisation and other recent changes in the urban landscape—decentralisation, food security, volatile prices and energy supply, the global financial crisis, climate change, and the growing recognition of the role cities play in national economic development—have necessitated a review of the World Bank’s approach to city development and the formulation of a new urban strategy. “Urbanisation is a vital phase of development, and if managed well, it can be a key driver of long-term economic growth in a country. Climate change, jobs, poverty, education, health, infrastructure— these are all development challenges closely intertwined with cities,” said World Bank President, Robert Zoellick at the launch. “That’s why it is so important for the global community to help developing countries address the urbanisation challenge.”

The World Bank and Singapore: a strategic partnership

The new strategy was launched at the World Bank-Singapore Infrastructure Finance Summit, a landmark event organised by the World Bank–Singapore Urban Hub, the Singapore Ministry of Finance, and the Monetary Authority of Singapore, in association with the Financial Times.

The World Bank–Singapore Urban Hub is the core of a strategic partnership between the World Bank and Singapore that aims to help developing countries tap into Singapore’s extensive experience with urban management as they take advantage of the economic opportunities associated with rapid urbanisation. 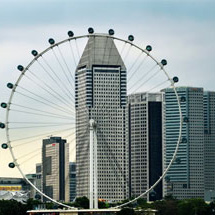 By establishing the Urban Hub, the Bank is seeking to leverage the expertise of Singapore in city management in areas such as water resource management, zoning regulation, and user charges for infrastructure, and share it with other developing countries.

“As a city-state, Singapore has learned many lessons in urban management, often after years of experimentation. This is an exciting partnership with the World Bank, which will allow us to share what we have learnt with others at a time of massive urbanisation in Asia,” said Singapore’s Minister for Finance, Tharman Shanmugaratnam.

The new strategy draws on two key principles. First, that density, agglomeration, and proximity are fundamental to human advancement, economic productivity, and social equity. Second, that cities must plan and prepare for this urbanisation in order to be well managed and sustainable.

The main messages informing the strategy are:

--  Urbanisation is too important to be left to cities alone—it requires national attention to critical policy areas, such as land and housing markets, that fall beyond the purview of a single city administration.

--  Cities will need to be equipped to handle new residents—this will require being more proactive, for instance, in updating their urban planning regulations to enable density and to prevent demand pressures for scarce housing and land to bid up prices excessively.

--  The costs of not dealing now with the coming urban growth will be excessive and difficult to reverse.

--  To reach the increasing number of secondary cities, where much urban growth is happening today, the World Bank will expand on its wholesaling approaches by working through financial intermediaries and by developing national and state programs that retail financial services and technical support to local governments. “The new Urban and Local Government Strategy is the Bank’s first comprehensive framework for urban development issued in the last 10 years, and it comes at critical time for cities in developing countries”, said Zoubida Allaoua, Director of the World Bank’s Finance, Economics and Urban Department.

In its World Development Report 2009, the Bank challenged the assumption that economic activities must be spread geographically to benefit the world’s most poor and vulnerable and argued against distributing economic activity from urban centres.It contended that the most effective policies for promoting long-term growth are those that facilitate geographic concentration and economic integration.

The new urban strategy realigns the Bank’s urban business with five business lines considered critical for cities and local governments over the decade ahead:

--  Focusing on the core elements of the city system: city management, finance, and governance

These five business lines set the benchmark for the World Bank to monitor its financing and policy advice.

In remarks at the Summit, John Roome, Director of Sustainable Development for East Asia at the Bank, presented a detailed description of how the strategy will be implemented in the East Asia region. He did so within the framework of five thematic areas: growth, delivery of services (particularly to the poor), environmental sustainability and climate change, integrated urban development and strategic action, and local needs and institutional variations.

Mr. Roome also underscored that the new strategy emphasises helping cities to build on their existing assets and endowments that are often overlooked, such as their rivers, canals, and waterways.

--  Read remarks on the urban strategy by John Roome, East Asia Director for Sustainable Development at the World Bank, delivered at the United Cities and Local Government World Council in Guangzhou, China 13 November 2009