As part of Cities Alliance support for Latin America in advance of Habitat III, the partnership actively participated in the Habitat III Regional Meeting held in Toluca, Mexico 18-20 April 2016. We also co-organised seven side events with a wide range of partners.

[2 May 2016] -- As part of Cities Alliance support for Latin America in advance of Habitat III, the partnership actively participated in the Habitat III Regional Meeting held in Toluca, Mexico 18-20 April 2016.

At the workshop, we joined some 25 policy unit experts from Latin America, representatives of national governments, the Ministers of Housing and Urban Development of Latin America and the Caribbean (known by its Spanish acronym MINURVI), and institutions to provide inputs to the draft Toluca Declaration, many of which were incorporated in the final version.

The major outcome of the Toluca meeting, the Declaration stresses the concept of a diverse, democratic city. It recognises that some countries in the region have adopted the right to the city approach as a central concept where all human rights can be effectively recognised in the spaces where people live.

The Declaration also highlights the need to improve planning and development with a focus on the most vulnerable, excluded segments of the population. In addition, it calls for a more integrated, sustainable approach to planning that aims to overcome segregation and provides a more equitable sharing of public spaces.

“The debates at Toluca were high quality and showed an intense mobilisation by key regional stakeholders,” noted Anaclaudia Rossbach, Cities Alliance Regional Adviser for Latin America and the Caribbean, who attended the event and participated in the preliminary meetings to inform the Declaration.

“It was an important opportunity for the Cities Alliance to engage with all levels of stakeholders from the region – civil society, university and government – through our side events and contribute to the discourse,” Ms. Rossbach noted.

At Toluca, Cities Alliance co-organised seven side events (out of a total of 44 held) with a wide range of partners, including Brazil’s Ministry of Cities, the Governments of Colombia and Ecuador, UNDP, UNEP, AVINA, the World Resources Institute, GIZ, OECD, UCLG, FLACSO, MINURVI, the Central American Social Integration System (SISCA), as well as universities and civil society organisations from the region.

The side events at Toluca were especially well received, with many participants finding them high-quality and informative. The sessions addressed a range of topics – regional perspectives for the new urban agenda, legal framework for national urban policies, intermediary cities, inclusive economic development, resilience, and community/grassroots mobilisation.

The Cities Alliance team also took advantage of the opportunity to meet with members and hold a final consultation meeting on the partnership’s new strategy for Latin America and the Caribbean. A final version is expected to be completed within the next few months.

The Declaration incorporated main aspects of the urban sector in the Latin America and Caribbean region. Here some highlights:

--  The contribution that recent urban policies from LAC can make towards the global construction of the new urban agenda.

--  The recognition of urbanisation as synonymous for development

--  The concept of the Right to the City.

--  Recognition of the diversity in the cities, the need to provide safe spaces, with a strong gender perspective throughout the whole declaration.

--  It expands and builds on the concept of multi-dimensional urban planning (social, economic, environmental) within networks and systems of cities.

--  It brings the concept of multilevel governance under several scales and spheres of cities, building capacity along with decentralisation process and including all sizes of cities.

--  A wider approach to housing to tackle qualitative and quantitative deficits, incorporating informal settlements into mainstream planning, and promoting security of tenure – essentially housing as the core of integrated and holistic urban projects.

--  The need to universalise and rapidly scale up the provision of basic urban services such as water and sanitation.

--  Sustainable mobility, a focus on people, with inclusive and equitable mobility schemes, and a fairer, more equitable distribution of public space. Affordable prices for all.

--  On land, it calls for minimising land speculation and promoting a more equitable share of costs and benefits among the population through stronger land regulation schemes; overcoming segregation.

--  On climate change, it recognises the role of cities in mitigation and the need to reduce consumption standards and improve the sustainability aspect of planning and building, as well as revitalising degraded urban ecosystems.

--  On resilience, it calls for reduced risk exposure with holistic strategies to deal with populations living in vulnerable areas, especially informal settlements, with a stronger social approach to supporting prevention and mitigation measures through in situ interventions, with planned and agreed resettlement if needed. 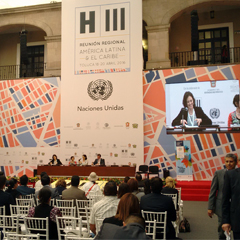 Cities Alliance Senior Urban Specialist Alexa Kurth, seen here on the big screen, participated in three side events at Toluca as a panellist.

At Toluca, Cities Alliance co-organised seven side events (out of a total of 44 held) with a wide range of partners.

As Latin America Mobilises for Habitat III, Cities Alliance Offers a Platform for Knowledge and Cooperation