The report takes an explicit stand against national and local government policy efforts to control rural-urban migration that are rooted in the early literature on migration’s contribution to urban growth and urban underdevelopment.

These negative views made it difficult to shape inclusive development strategies at the municipal level; most governments and cities pursue policies that discourage or at best tolerate rural-urban migration, with the intention to severely curtail the potential of migration.

It shows that, with notable exceptions, natural growth is a stronger determinant of urban growth, and that migrants find work rapidly – addressing the two main misconceptions driving restrictive migration policies and a negative narrative on migrants adding to the urban poor.

The research further addresses the reductionistic debate on migration and urban development that has primarily focused on larger cities and rural-urban migrants. It explores migration flows along the full urban hierarchy, from secondary to primary cities, as well as urban-urban migration to underline the dynamic and heterogenetic nature of mobility.

The report presents a set of concrete recommendations for leveraging the documented potential of migration. Its main message is that if migrants generally integrate well into urban labour markets, a broader and more differentiated policy package is needed to increase labour market outcomes for all urban citizens – migrants and natives alike.

Secondary cities, however, require broader financial and institutional capacity to make the necessary complementary investments into housing, urban services, and infrastructure, corresponding with the number and needs of their formal and informal residents (who remain largely unrecorded). A common outcome of unmanaged urban growth is pressure on housing, livelihoods, and services that fuel a persistent negative narrative on newcomers as responsible for most ills.

While the research highlights the positive effects of rural-to-secondary city migration, it also points out legal, cultural, and social barriers to accessing housing, employment, education, health, and other social services. It notes problems including unequal opportunities for equal qualifications, lower pay for similar work with similar qualifications, discrimination, harassment, and gender-based violence and makes recommendations to address them. 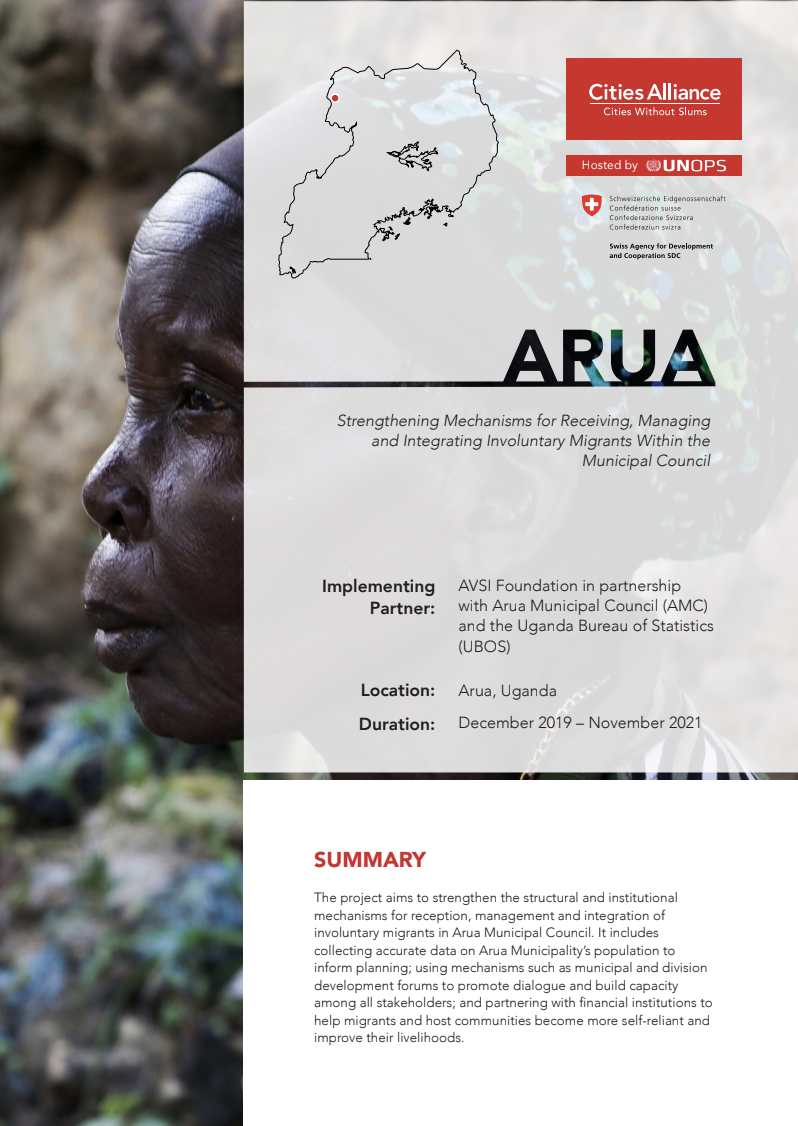 In Uganda, a campaign to draw attention to refugees in secondary cities is in preparation. The city initiative in Arua and analytical work on refugees and secondary cities has drawn Cities Alliance’s attention to spatial disparities in recognizing refugees. Academic literature on urban displacement has disproportionately focused on capital cities, contributing to a perception that they are the main urban destination for displaced people. In Uganda, refugee registration centres are only available in refugee settlements and Kampala, the capital. Secondary cities or towns in Uganda cannot register refugees, a process that would regularly document their numbers. This excludes municipalities from much-needed support to provide for all their residents and prevents refugees from accessing entitlements, including national Covid-19 relief. 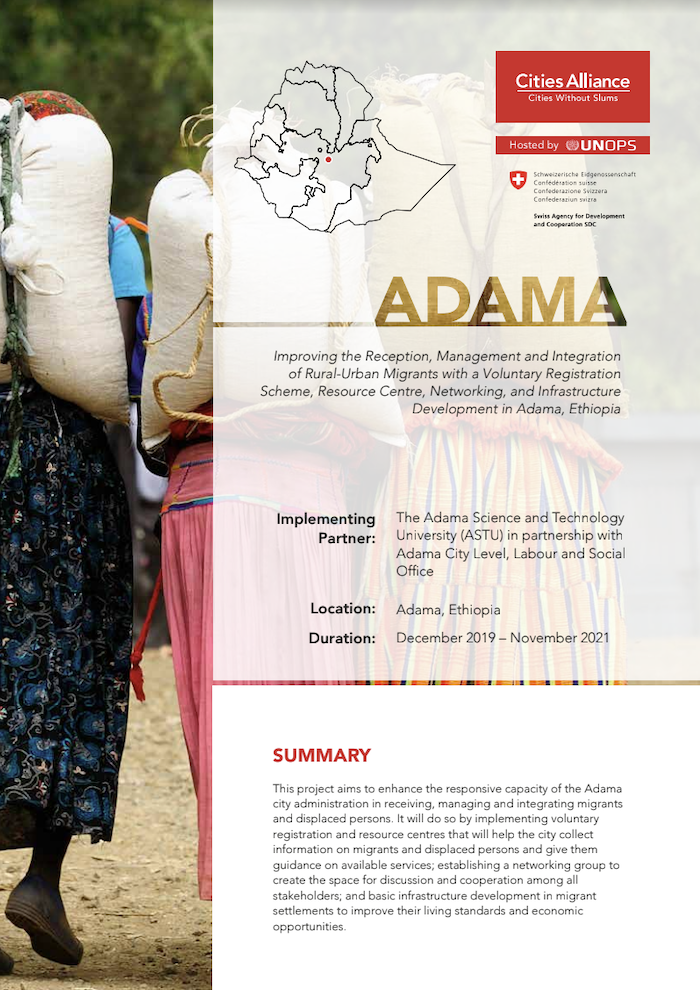 In Adama, a market in an Internal Displaced Persons (IDP) neighbourhood is under full construction. Over 2,000 migrants have already sought services at the city’s new municipal registration centres, with almost 700 (97% female) matched with jobs in the city industrial park. 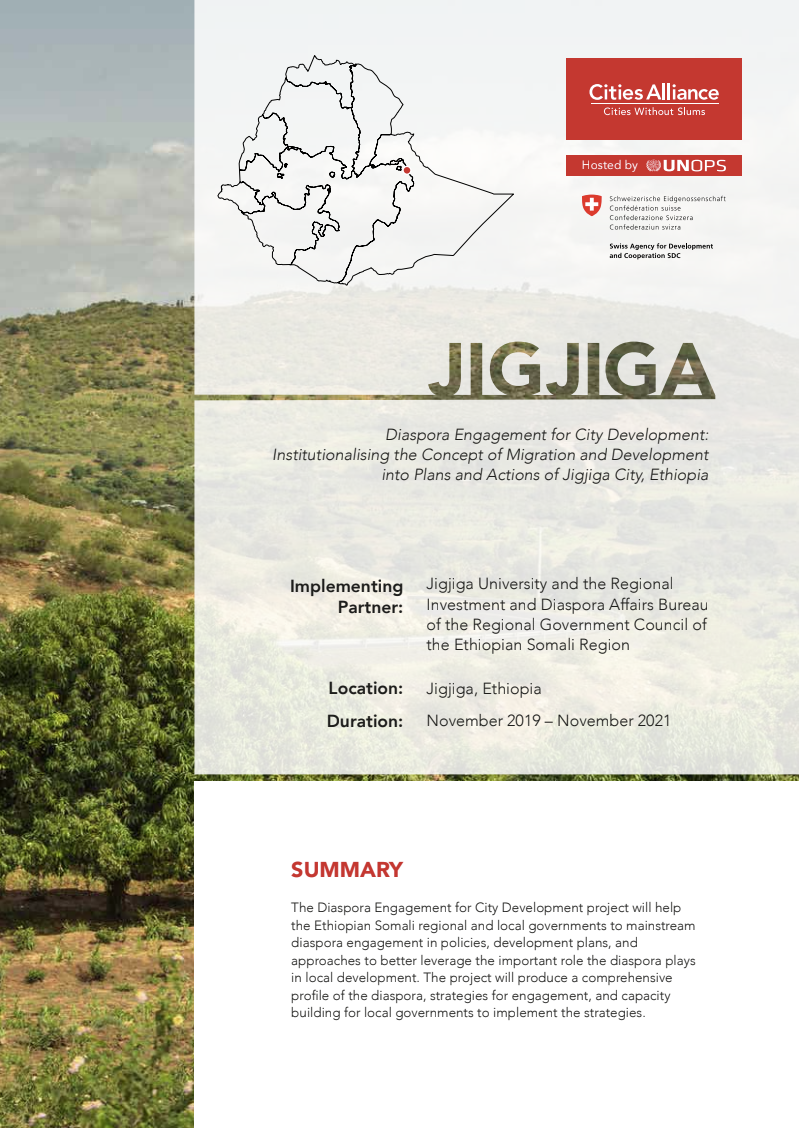 In Jigjiga, the first Somali Diaspora Forum discussed ownership and roles for the new Diaspora Engagement Strategy. Knowledge on migration and cities was further mainstreamed at Jigjiga University’s Somali Cities Study Conference in 2021, which featured 400 participants. 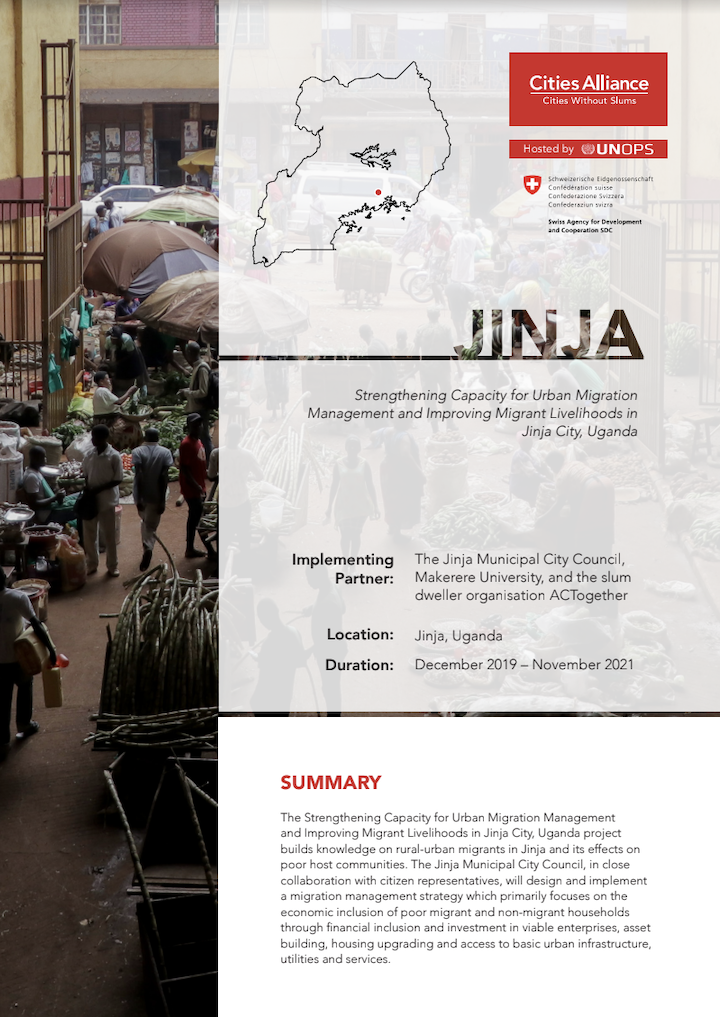 In Jinja, the slum dwellers organization ACTogether has mobilized small businesses into 162 saving groups with 8,828 members (42% women); 17 of the saving groups submitted proposals to the initiative’s new Jinja Community Development Fund for financing. 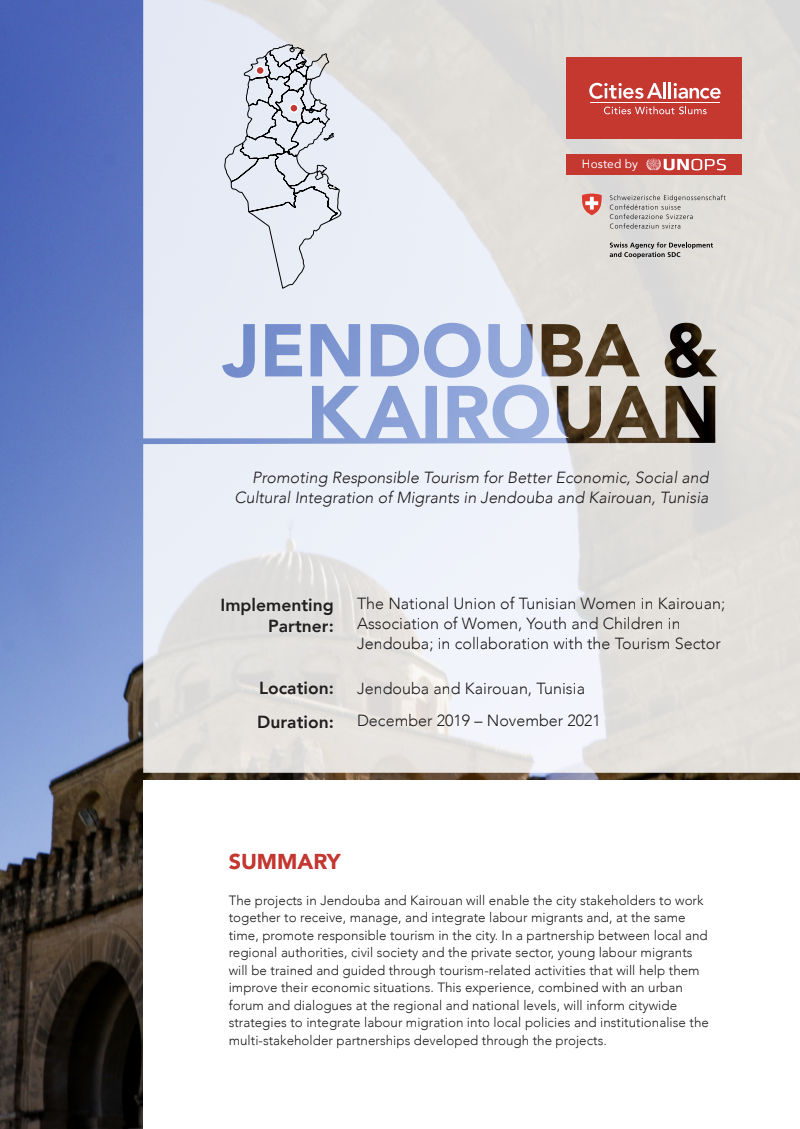 In Kairouan, a women-run artisanal market with ten large, attractive stalls is up and running. The project’s secondary activity on designing tourism circuits, with a direct cost of US $10,000, has already leveraged US $140,000 in public funding for implementation. The National Office for Tourism decided to fully develop the identified tourism circuits in the three communes of Ain Jeloula, Haffouz, and Oueslatia as part of a new government programme. 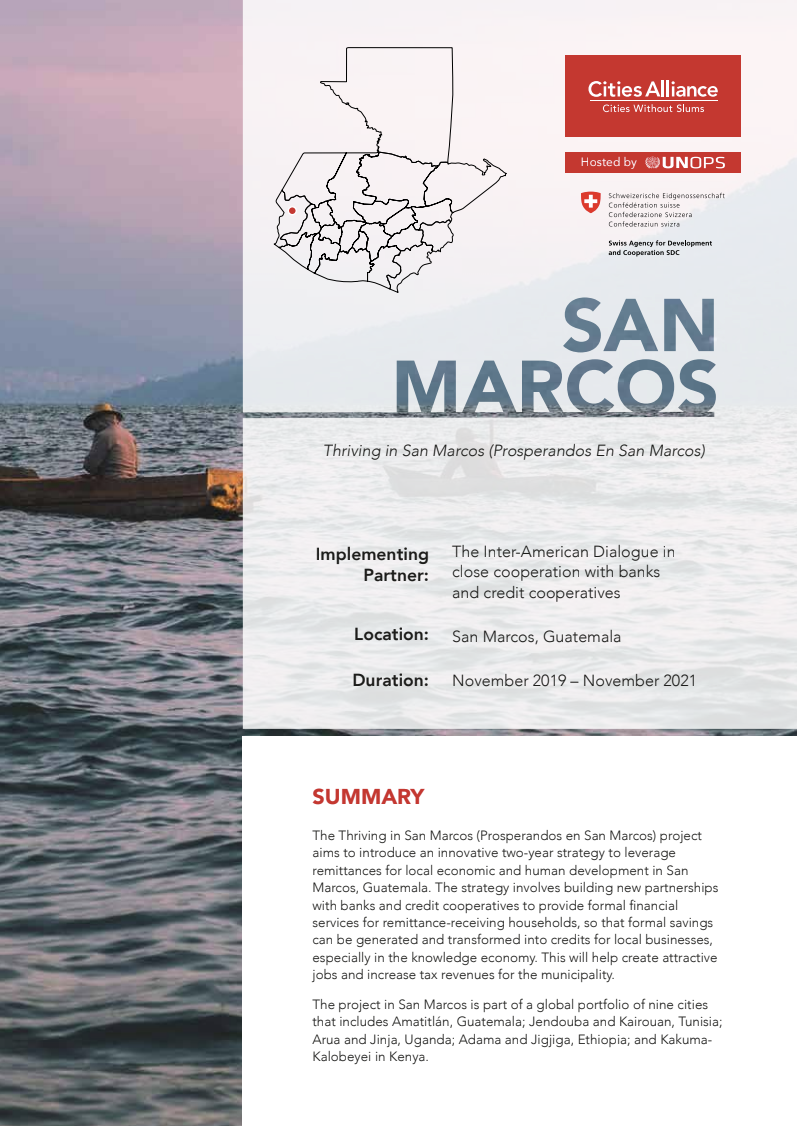 San Marcos’ investment of US $300,000 has so far funded 25,000 short financial advisory sessions that mobilized 6,000 remittance recipients, who formalized US $2,370,000 in savings. Cooperating banks have already transformed US $450,000 of those savings into loans for local entrepreneurship. 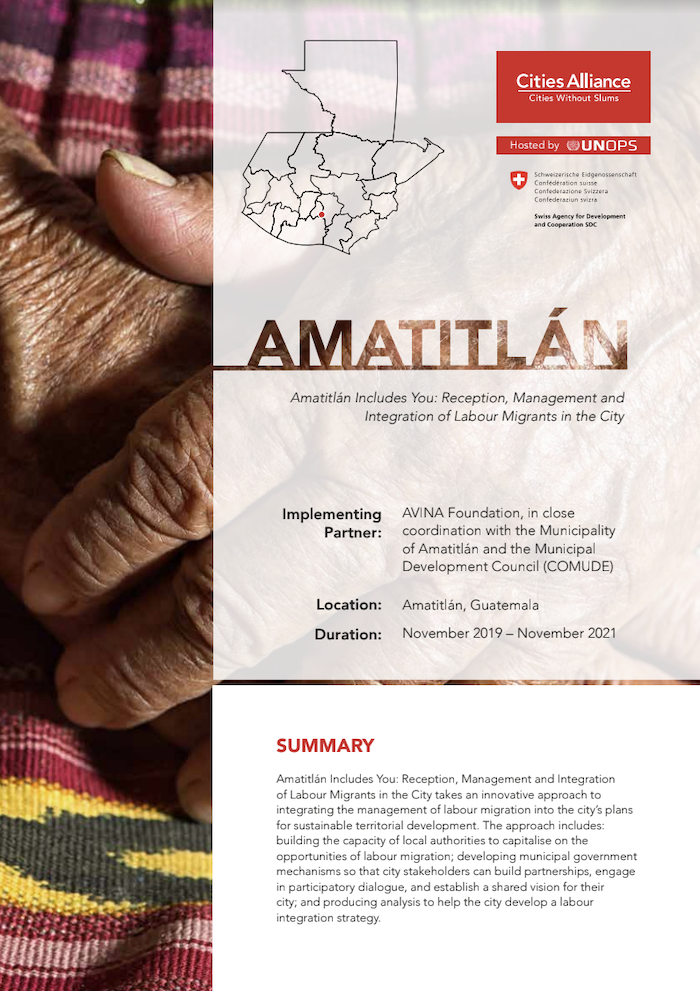 Amatitlán is preparing three participatory strategies on local economic development, access to housing, and prevention of violence. These strategies build on the project’s socio-urban and environmental diagnosis report, the Diplomaed in Territorial Management curriculum, and the technical assistance provided to the municipality. The Municipal Policy on Integration of Migrants is designed with ongoing advocacy for municipal budget support. 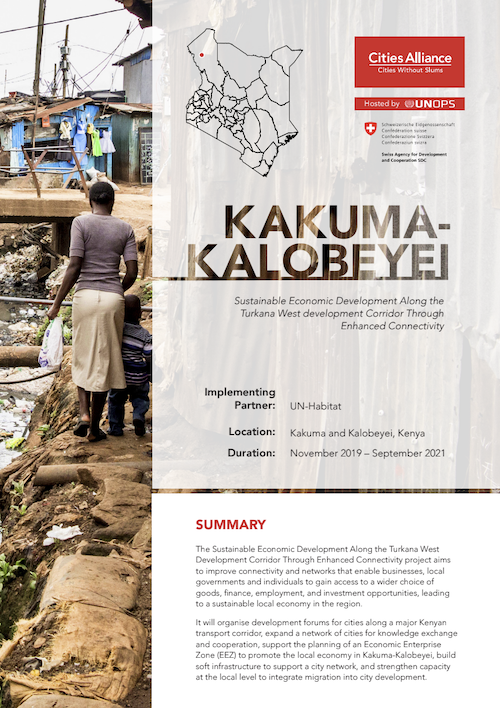 Kakuma-Kalobeyei has fostered improved connectivity and networks that enable businesses, local governments, and individuals to access a wider choice of goods, finance, employment, and investment opportunities, leading to a sustainable local economy in the region. Development forums are organized along a major Kenyan transport corridor, and local capacities to integrate migration into city development have been strengthened.

The CRRF: Inclusive Urban Development and Mobility - Regional Network and Dialogue project aims to facilitate regional networks and dialogue to help secondary cities in the Horn of Africa better address the challenges and opportunities related to refugees in urban settings. It is implemented by Cities Alliance with funding from the EU through its Emergency Trust Fund for Africa. Learn more

Nine secondary cities in the Horn of Africa are finalizing their urban expansion plans. Cities designated up to five municipal staff to form urban expansion teams to lead the planning process. Local political leaders, city managers, and mayors are working to ensure national approval and financing to implement the plans. The Cities and Migration programme intensively engaged urban ministries in Ethiopia and Uganda to realize necessary endorsements. Technical assistance enabled the planning process, with virtual training sessions for cities and ministerial teams and two in-person national workshops in Ethiopia and Uganda.

A major knowledge product is rethinking labour migration and secondary cities. Implemented by the World Bank, a Cities Alliance member, the flagship report Migrants, Markets and Mayors – Rising Above the Employment Challenge in Africa’s Secondary Cities addresses key policy issues and recommends how African secondary towns and cities can better prepare for and manage internal economic migration to the mutual benefit of both cities and migrants. The findings push the knowledge boundaries on migrant integration into cities and provide new insights into where the challenges really lie.

A regional city network in the Horn of Africa is helping cities implement the Comprehensive Refugee Response Framework (CRRF). The regional network and dialogue supports secondary cities (Arua and Koboko in Uganda, Kakuma-Kalobeyei in Kenya, Assosa and Jigjiga in Ethiopia, and Gabiley and Boroma in Somalia) to strengthen their voices and bring national and international attention to urban refugees and displaced persons. The dialogue includes includes refugee and host community representatives, allowing them to discuss their needs, challenges, and potential solutions with the appropriate municipal, national and regional actors. Peer learning with neighboring cities facing similar challenges informs cities on solutions to improving living conditions and opportunities for both refugees and host populations, reducing the risk of conflict and providing access to basic services for all vulnerable city residents. The network also gives cities the opportunity to advocate at global debates such as the Global Refugee Forum, increasing their international presence, improving technical knowledge and capacities, and supporting the implementation of global agendas.